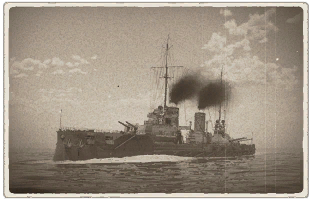 As a battlecruiser, the Westfalen is fast and well-armed. While it only has 6 guns on broadside, the guns do a huge amount of damage and have a reload of 20 seconds, much faster than other battlecruisers and battleships (and the same as some American heavy cruisers). While other battleships can punch through your armour, cruisers will seriously struggle. Target cruisers and punish them with your strong secondary guns, colossal main battery firepower, and good reload. They'll struggle with your armour and they'll struggle to outrun you.

Your main threat will be battleships, who can angle against your guns and punch through your armour comfortably. Use your mobility to get away from, or around them, and don't be afraid to unleash some torpedoes on them if they do get too close.