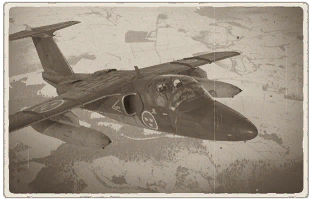 The SK60B is a rank V Swedish jet attacker with a battle rating of 7.3 (AB/RB/SB). It was introduced in Update "New Power".

The SK60B has no armour. The internal modules of the aircraft are fairly spaced out with engines far apart in the rear fuselage and fuel tanks in the wings and forward fuselage.

The SK60B can be outfitted with the following ordnance:

The standard armament found on the SK60B are two powerful Akan m/55 gunpods. These cannons are identical to platforms like the J35D, giving the SK60B a formidable burst-mass of 12,15 kg/s! These guns are incredibly reliable and fast in velocity, as they're replicas of the ADEN platform. This is one of the main advantages of the SK60B outside of maneuverability. Since the SK60B isn't particulary swift, having armament capable of reaching most opponents is a welcome addition. This can catch many people off-guard, and thus it's recommended to practice aiming these guns, along with finding a comfortable convergence setting for maximum efficiency.

These gunpods are also good against ground-based targets, especially in Air Realistic battles, where light pillboxes are common. The Akan m/55 is capable of destroying these in a short burst, allowing for some effective ticket bleed when there are no enemy fighters around. They can also be used in Ground Realistic to a certain extent, as they disintegrate any open-top vehicle. They also aid in air-support, as most fighters at this BR are propeller powered, unable to defend themselves against high-velocity 30mm revolver cannons.

The SK60B features a lot of unique armament compared to most other Swedish vehicles. One of the most unique of which are two Rb05A Air-to-Ground missiles. Similar to the American AGM-12B Bullpup in design and explosive mass, the SK60B goes one step further by featuring a proximity-fuze inside the missile. This makes the Rb05 incredibly unique for its class, as it is the only missile outside of helicopters, capable of effectively dealing with both aerial and grounded opponents. Since the missile is intended for distanced ground-attacks, the Rb05 features a range of over 8km, making it useful against long-range bombers such as the B-29. In Ground-Realistic the missile is even more useful, as the explosive mass of 48kg allows for reliable kills against ground-units without putting the SK60B in front of radar SPAA. And since the Rb05 can be used against aerial opponents, the SK60B can easily deal with helicopters without going back to base.

For players more interested in unguided air-support, the SK60B doesn't disappoint! The SK60B features 12 m/56D rockets also found on the J35D. Thanks to the superior aerodynamics of the SK60B, along with a lower battle-rating, the m/56 rockets get a lot more use than on the Draken. The velocity is immense, reaching 650m/s, allowing for accurate and distanced engagements. The m/56D carriers less explosives than the earlier m/49A, but compensates for this by still featuring the same penetration values. This makes the m/56 overall better than the earlier m/49A, as the higher velocity makes engagements a lot easier.

One downside, however, is that the SK60B fires two rockets simultaneously from each wing. This is quite normal for most nations, but Sweden has been well known for having single-fire rockets, even on winged mounts, which can confuse people who've already gotten used to planes such as the A21A-3. The SK60B is incredibly vulnerable to SPAA when using the m/56D, as they require the SK60B to position itself close to the battlefield. And since the SK60B is one of the slowest jet-powered aircraft in the game, even machine-gun fire can prove lethal if the plane is flown carelessly. Sticking low to the ground and carefully observing opponents is a must if a pilot wants to make every rocket count.

Unlike most aircraft orders from the Swedish Air-Force, the Sk60 has an unusual background compared to its peers. The aircraft initially started as a commercial project under the name 220, led by none other than Eric Bratt, one of the main engineers behind the J35D. The aircraft was supposed to serve as a private airliner, sporting two engines, and a delta-wing design. But in the autumn of 1958, the Swedish Air-Force was looking for a successor to replace the aging Sk28C Vampire. This led Bratt and his team to rework the design of project 220, switching the delta-wing design for a conventional straight-wing one. When the Air-Force later specified that this trainer had to carry external ordinance in the form of gun pods, rockets, and bombs, the wing was moved to an upper position. A result of this radical change forced a complete reconstruction of the elevator, mounting it higher than before. Along with some tweaking of the cockpit design, the project received the official name Saab 105. 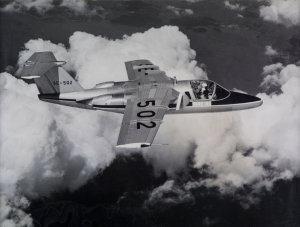 The first test flight was conducted in July of 1963, piloted by Karl-Erik Fernberg. The second prototype flew a year later, in June 1964. After some extensive modifying of the air-intakes and wing-structure, the plane was deemed worthy of production. However, during this period the design was going through extensive changes in terms of propulsion, as the french Turbomèca-Aubisque engines (RM9) lacked the required strength. This problem would delay the program another year, but would increase the overall engine thrust. The third prototype was deemed worthy of service by December of 1965. And by April 1966, the Sk60A would enter service with F5 Air-Division stationed at Ljungbyhed. Disappointingly, the french engines showed a lack of reliability and required a lot of modifying. This issue was however solved by SAAB during the second batch. The deliveries were finalized by 1968. Sk60B

The Sk60B was the second modification of the Saab 105. This version, just like the Sk60C, was directly modified from already existing Sk60A’s. The Sk60B featured a gunsight, along with the capability of carrying external ordinance in the form of bombs and rockets. The Sk60C went through identical modifications but featured an elongated nose-cone housing a panoramic camera for additional reconnaissance capabilities. Although the early Sk60 only sported a carrying capacity of around 700kg’s, the external ordinance allowed for diverse options depending on the mission, capable of dealing with lightly, and heavily armoured targets.

The Sk60B and Sk60C would see extensive use outside the primary training purpose, as on the 29th of May, 1972, the Swedish government decided a reorganization of the Air-Force's attacker divisions. This forced four attack divisions to be converted into four light-attack divisions, making use of the lightweight Sk60B and Sk60C. These would be stationed accordingly at F21, F5, F3, and F16 fighter wing. The Sk60 was light and slow compared to the Viggen platform. The plane operated inland, as the strike capacity wasn’t enough for naval operations, aside from small patrol boats and landing crafts. One major advantage of the Sk60 however, was the small profile and good aerodynamic properties, allowing for precise strike operations. This was already realized long before 1972, as F21 Luleå, an air division located alongside infantry and armoured divisions, saw potential in the Sk60 for close air support as early as 1969. This attacker mentality was put into action on all divisions between 1974 and 1976 and would see extensive use throughout the decade. Although the Sk60B was more of a last-ditch vehicle for air support, the plane proved lethal when put against armoured targets and helicopters, as it could remain fairly hidden by flying low against the ground. This strategy was necessary to avoid incoming fire, as the Sk60 featured no countermeasures or modern avionics. But as a result of the twin-seat design, low altitude flying became a lot safer. The pilot could focus entirely on flying as the second seat was occupied by a navigator giving directions. Though a lack of avionics was a major as the Sk60B required full eye-contact with the target to engage it. This limited the plane to only operate during clear weather, and along with a limited range, made the plane less ideal for wartime conditions.

The light attack divisions were already getting disbanded by the early 80s, and the light-attack educational program, along with the remaining light-attack divisions, were entirely disbanded by 1998. Although it’s easy to determine this as the end for the Sk60, the plane was still a fantastic trainer. The Sk60 went through a major engine overhaul in 1992, doubling its carrying capacity thanks to a much stronger engine. This fixed a lot of reliability issues, and thanks to modern avionics, the Sk60 featured ballistic computers and navigational systems. The Sk60 was projected to be withdrawn from service several times, but thanks to its reliability and flight performance, the Sk60 remains in active use with both the Swedish and Austrian air force, more than 55 years after its introduction. By some estimates, the Sk60 will remain in the Swedish Air-Force until 2030, making the Sk60 older than its numerical designation.

In 1959, Saab began development of a new twin-engine jet aircraft, intended to serve a wide variety of different roles both in civilian and military use. This led to questions being raised regarding the powerplant choice for the new aircraft, causing delays in development. However, once the decision was made to develop the new aircraft solely for military purposes, the project substantially picked up in momentum.

By 1961, Saab’s efforts were endorsed by the Swedish Air Force, which sponsored the development of the aircraft, by then known as the Saab 105, and ordered the production of a prototype in trainer configuration for testing. The prototype took to the skies for its maiden flight in June 1963 and quickly demonstrated excellent handling characteristics. In 1964, the Swedish Air Force placed an initial order for 130 Saab 105’s, with that order being raised to 150 machines soon after. The machine received the designation Sk 60 in Swedish service.

During production, the Swedish Air Force drew conclusions from the experiences made by the U.S. forces during the Vietnam War and decided to convert the Saab 105 trainer into a light attack and reconnaissance aircraft. This undertaking proved to be successful, with 60 machines of the trainer version being converted for ground attack missions.

Apart from the Swedish Air Force, Austria also ordered a modified multirole version of the Saab 105 for its air force. Both air forces still employ the Saab 105 to the present day and around 190 units of the type were built in total. 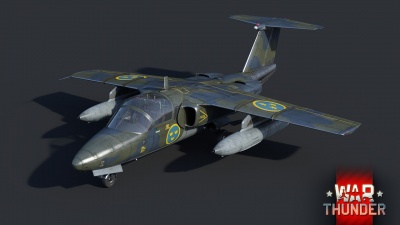