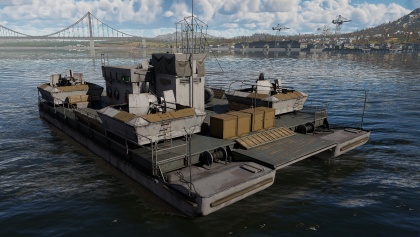 The Siebelfähre 40 Light is a Rank III German anti-air ferry with a battle rating of 2.7 (AB/RB/SB). It was introduced in Update 1.79 "Project X" in the fleet closed beta test.

SF40 has a single 37 mm FlaK-Lafette C/36 atop its central deckhouse. It has a rate of fire of 250 rounds per minute and fires from a 5-round magazine, with a total of 2,000 rounds of ammunition available. The gun can be reloaded in 0.25 seconds with a stock crew and in 0.13 seconds with an aced crew. It can traverse horizontally at a rate of 50°/s and vertically at a rate of 70°/s.

The Flakvierling 38 20 mm cannons are among the best in the game. Compared to other 20 mm naval cannons in the game, these have the largest explosive mass in the HE rounds, the greatest AP penetration with the AP rounds, as well as a decent rate of fire and muzzle velocity. Altogether, this allows SF40 Leichte to quickly destroy any enemy boat with a single burst, especially since 12 guns can be brought on target at once. Two problems exist for this gun: the relatively small 40-round magazines (which, because of the rate of fire, means frequent reloads), and the maximum range of roughly 2 km (common for most guns of this calibre). The latter is a much greater issue. Whereas faster vessels with such a problem can evade or quickly get behind cover, SF40 Leichte is essentially a stationary target for weapons like Bofors L/60 Mark 1 (40 mm) or large-calibre cannons (3-inch or larger). Boats armed with these can comfortably sit outside SF40 Leichte's range and gradually chip away at the crew. This is even further accentuated when faced wtih destroyers, since they carry much larger guns and are generally unaffected by SF40 Leichte's own 20 mm cannons. Armoured targets may also be an issue, despite the above-average penetration of the 20 mm cannons. While the 37 mm FlaK-Lafette C/36, with its higher penetration, can be used against such enemies, it cannot be fired directly forwards, nor can it hit any targets within approximately 1.5 km due to its maximum depression being 1° above the neutral position. It's often better to just pepper such targets with 20 mm AP and leave the 37 mm for anti-aircraft work.