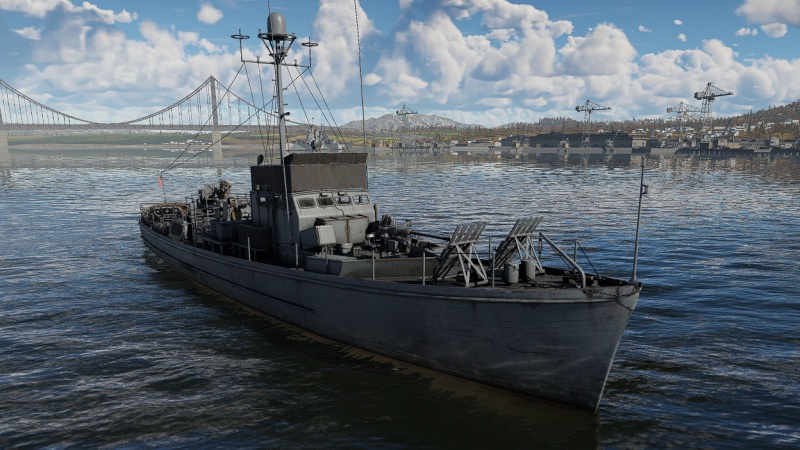 Use her as your first boat or your last in the match. The highly accurate and powerful 40 mm Bofors will let you pick off the small, fast torpedo boats as they rush a cap. One can also get early damage to larger ships, but do not stay exposed for too long. The 40 mm can overheat but quickly cools down. Toward the end of the matches players often take out small boats or aircraft, and that is where SC-497 shines. The cluster of 3 x 20 mm will easily take down any aircraft that comes close. Equipping depth charges is very individual as successful use depends on playstyle. As long as one uses her smartly, one will do brilliantly.

The SC-497 is the first of the 110 foot long, wooden hull sub-chaser class closely based on the experimental SC-493. She was built by the Fisher Boat Company of Detroit, possibly a forgotten division of the gargantuan General Motors manufacturing conglomerate. Eventually 438 units where built and used worldwide and extensively as one of the "Splinter fleet" (for its wooden hull). It was eventually decided to call wooden hull boats sub-hunters "SC" (steel hull were called PC). One third (142) of this boats were lent to allies as part of the Lend-Lease program, with 78 to the Soviet Union, 50 to France, 8 to Brazil, 3 to Mexico, and 3 to Norway. The three for Norway was shipped (placed on a ship and literally shipped) to UK and given to the Free Norwegian navy used for supplying resistance groups in Norway. Service continued a few years after the war, others sold to other navies serving for a few more years before eventually disappearing. Today only 2 exist, the charter boat MV Cape Pine, and the Royal Norwegian Navy HNoMS Hitra (formerly SC-718) which is in her WW2 configuration (she is active RN boat, but operates as a museum).