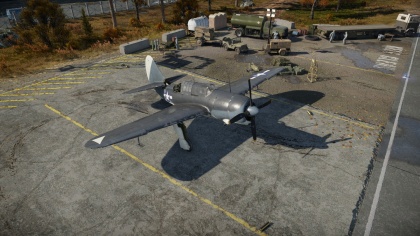 The SB2C-4 is very much like it's older sibling model in-game, which is a dive bomber/attacker capable of wreaking havoc to both soft and hard ground targets and enemy bases. Despite its capability to carry rockets and under-wing bombs and be used as an attacker, do not attempt to do so, unless you are sure a nearby enemy fighter does not immediately single you out as a target. This aircraft has fairly good manoeuvrability but does not fly nearly as well as any of the fighters you may encounter. However, this does not mean you cannot defend yourself in dire times. A distinct advantage of this aircraft is its firepower is more than enough to bring down any attacking enemy pilot with some skill, however, it's instability in coming out of rough turns can cause problems on getting guns on target difficult. Most pilots don't expect you to carry so much firepower with the extra machine guns so taking head-ons with some planes can work in your favor because most pilots do not expect you to have that much firepower. Moreover, due to it's firepower and airspawn, being a bomber hunter is no problem either. It is important to remember to use this plane's main niche to your advantage as you will be vulnerable to enemy gunners. This plane's niche as fast bomber is further reinforced compared to the SB2C-1c as it carries double the bomb load (2,000 lb/ 907 kg) and if you survive long enough with your firepower to defend yourself you can be a considerable drain to the enemy's ticket counter. Overall, this aircraft is a solid performer in Arcade battles which is a delightful blend of defensive/offensive firepower, speed (not fighter-like though), maneuverability and bombing capability specifically for a dive bomber. A recommended aircraft to take out in tier 3 battles and as a silver lions factory!

In Realistic Battles, the SB2C-4 excels at the ground attack role. Use the bombs and rockets against hard targets (such as heavy pillboxes and tanks), and the 20 mm cannons for taking out soft targets and light pillboxes. Even the universal ammo belt with 50/50 HEF and AP can take out light pillboxes when aiming for the roof, but belts with more AP will make it easier. However, its use doesn't end there. The SB2C is surprisingly maneuverable for a dive bomber, which combined with its high bomber spawn, effective armament, and dive brakes mean it can be used to dive on enemy fighters and bombers, and can even hold its own in a dogfight, especially if the enemy underestimates the plane's maneuverability. These characteristics are also good tactics for defending yourself, markedly since the tail gunner is lackluster. Unfortunately, this does not apply well when at a low energy state (ex: ground attacking at a low level). The SB2C has poor climb rate and acceleration, and experienced pilots will boom and zoom you and leave you few options to defend yourself (trying to get guns on target after an overshoot, forcing a head-on, etc.). Instead, try to stay above the battle and go for enemy aircraft, and once your team has a numerical advantage, go to ground level and ground attack, preferably under cover of fighters.

If you come across a SB2C-4, attack from its unprotected bottom which is easy to hit due to planes low speed and pilots rarely looking below their planes. Avoid attacking it when it is in a dive. Do not attempt to head-on the Helldiver as it's 20 mils can easily knock out your pilot.