Difference between revisions of "SA.342M Gazelle" 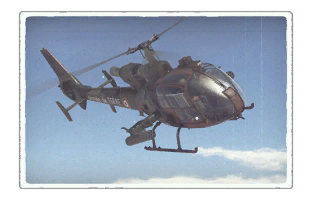 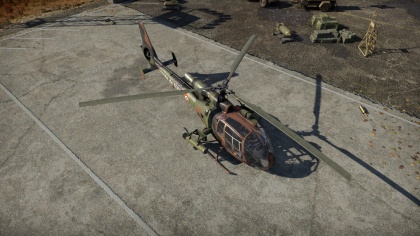 The SA.342M Gazelle is a rank VI French utility helicopter with a battle rating of 9.7 (AB/RB/SB). This helicopter was introduced in Update 1.87 "Locked On".

The Turbomeca Artouste Astazou XIV turbine engine powers the SA.342M Gazelle. Initial testing of this helicopter utilised a standard tail-rotor taken from the Alouette, however, design changes switched to a Fenestron-style tail, the first helicopter to do so. The Fenestron tail or “fantail” differs from a conventional tail rotor as it contains eight to eighteen blades housed within the tail unit of the helicopter. Advantages of the Fenestron include substantial noise reduction, protection of tail rotor damage from contact with other objects and protection of ground personnel working around the tail section. With the aid of the Fenestron tail, the Gazelle was the world’s fastest helicopter in its class during its early years.