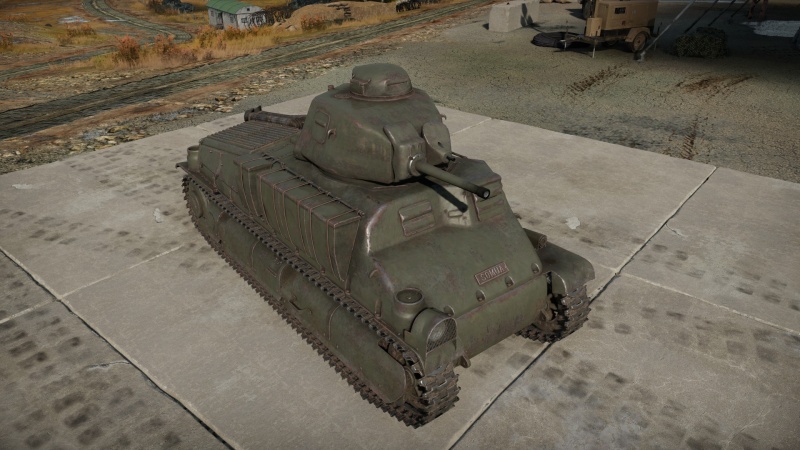 The Char de cavalerie SOMUA 1935 S (SOMUA's 1935 S cavalry tank) is a rank I French medium tank with a battle rating of 1.3 (AB/RB/SB). It was introduced in Update 1.75 "La Résistance". As it was considered to be the best tank at its time, being very mobile, easy to maintain while having good combat characteristics. As WW2 struck, these were on the frontlines, hence the nickname "Shield of The Republic". This tank will surely feel like a breath of fresh air over its underpowered predecessors.

The S.35 has the same turret design as on the Char B1 bis, meaning that the penetration, reload and turret rotation speed is the same (But there is no "mail slot" turret ring). The S.35 contains a 3 man crew (Gunner/Commander, Driver and Radio operator) so a well placed frontal shot from HEAT or from a high caliber gun will in majority of cases destroy you on the spot. The S.35 is best used when showing only its strong turret, exposing only one crew member at a time brings extra survivability. The S.35 is a tall and cumbersome tank at its battle rating, though it is relatively mobile with a 40 km/h top speed.

While being subpar to later pre-war tanks, this vehicle's main armament provides decent anti-tank capability. Its main flaw being slow reload and low spalling: make every shot count. Early commanders of French tanks should be used to command one-man turrets, with all their benefits and flaws. It is worth mentioning the shoulder gun stabilizer, which makes stop-and-shoot tactics effective.

The S.35 has a limited choice of ammunition:

All light tanks are to be feared as they can out-manoeuvre this cumbersome tank quite easily and most enemies with a bit of luck will eventually hit one of this tank's weak spots, the only thing to fear is facing a good bit of armour. With its low post-penetration damage, tank with many crew members are also hard to take down.

Following the outbreak of WW2, the S.35 was soon deployed to defend French soil against a German invasion. Because the tank was designed to fight contemporary armoured vehicles of other nations, it fared well against the onslaught of Panzer III's and early modifications of the Panzer IV.