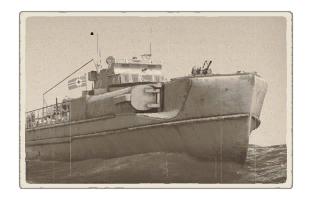 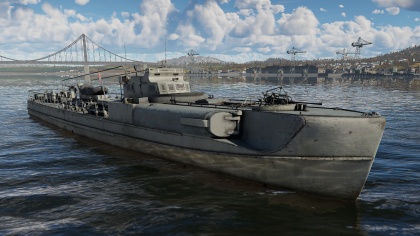 The S-38 is a rank I German motor torpedo boat with a battle rating of 1.7 (AB/RB/SB). It was introduced in Update 1.79 "Project X" as part of the fleet closed beta test.

The S-38 is a wooden-hulled vessel with a steel superstructure. The S-38 offers little resistance to damage as a result of its construction. The S-38 has a crew of 31, which means the S-38 can absorb reasonable amounts of damage when fired upon. Fire is a tangible threat on the S-38 because of its wooden hull. Due to the long construction of the ship, the crew is fairly spaced out. However, it is worth mentioning the S-38's bridge and radio station are in close proximity, meaning if one is damaged, it is likely the other will be damaged soon after.

The S-38 is a quick boat, capable of achieving roughly 101 KPH (63 MPH) forwards in arcade, and 33 KPH (21 MPH) in reverse. The vessel's acceleration is good, and the S-38 has a tight turning radius. Due to the balanced distribution of the ship, it will not roll too far when turning. The boat has a shallow draft that makes fighting in shallow waters and littorals possible.

The S-38 carries two 20mm automatic cannons. The S-38's weapons are, in proper hands, effective against enemy boats and aircraft. They have small magazines of 40 and 20 rounds respectively. The rearward cannon will run out of ammunition when the frontal cannon is half way through its magazine. Overheating is not a concern with these cannons; they do not overheat. Being small cannons, the S-38's 20mms traverse quickly, and offer decent angles of fire.

The S-38 can carry 6 WBD depth charges, which carry 130 Kg TNT (286 Lb. TNT) of explosive power. When used skillfully, these charges can be used to deal away with pursuers, or destroy inattentive enemies.

In arcade battles, the S-38 is often used for rushing capture points. This is one use for the boat. The S-38 can be used to deliver surprise attacks, and deal away with targets behind enemy lines; the vessel is quick enough to speed past enemies and take "long ways" around enemy vessels. Using the S-38 in frontal, or even close, combat is not advisable. Though the main cannons traverse quickly and deal notable damage, the hull is too fragile to support sustained frontal engagements. It is also not advisable to engage more than one target at once. The S-38's cannons are not suited for fighting in numerical inferiority. Either chose lone targets, or operate in larger groups.

The S-38 was developed and built by the German Lürssen Werft in 1938/1939. In total, 8 units of the standard S-38 were built, followed by 16 units of the improved -B variant (see S-38b). Its main use was to protect German convoys in the Baltic Sea as well as attacking Soviet ships. The S-38's plans were later used for the development of the Silbermöwe class in 1952.