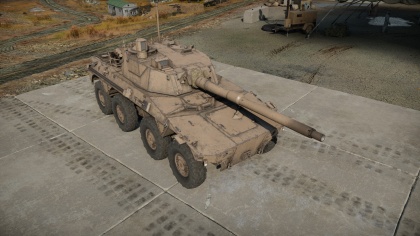 The Rooikat 105 is designed for high mobility day and night combat operations. Passive image intensifiers and thermal imaging equipment for night driving, navigation and weapon deployment permit round-the-clock combat operations. The Rooikat 105 is equipped with a GT-7 105mm anti-tank gun. The gun fires the full range of NATO full-pressure 105mm ammunition including generation I, II and III rounds. The gun, fitted with a 51-caliber thermal sleeve encased barrel, fires six rounds a minute. There are two 7.62mm machine guns, one co-axial to the main armament and one at the commander's position, for general purpose ground and air defence. War Thunder's version only has one usable machine gun, the one next to the gun. On both sides of the turret, there are 4 smoke grenades, mounted in a forward firing position. The smoke grenades form a dense protective smoke screen, which can be sustained using an exhaust smoke generator. The digital fire control system takes data from a suite of sensors and provides an automatic fire control solution. Automatic data input includes target range from a laser rangefinder, target speed and direction derived from tracking the target, crosswind speed, weapon tilt and the characteristics of the weapon. Manual data input includes ammunition type and environmental data. The fire control system allows the Rooikat to engage enemy targets while on the move across rough terrain. Three variations of fire directing systems are offered. The most complex system incorporates a primary stabilised gunner's sight, automatic computation and implementation of ballistic offset of the weapon, electro-mechanical gun control, stabilised main weapon, gunner's sight with day and night channel slaved to the main weapon and an independent panoramic commander's sight.