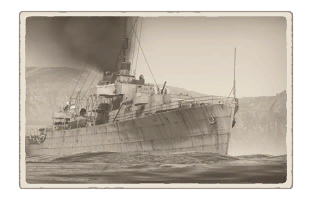 The River class, HMS Spey (K-246) is a rank IV British gunboat with a battle rating of 3.3 (AB/RB/SB). It was introduced in the Operation H.E.A.T event during Update 1.89 "Imperial Navy".

The River class does not have much in the way of armour. The hull of the ship is made from 8 mm thick steel, with the super structure being made of 4 mm thick steel. This is enough to repel damage from low calibre machine-guns, but does little against the cannons and auto-cannons commonly found at this battle rating. The only armour on the ship is around some of the gun shields.

The River class is not particularly fast being about the same speed as a destroyer, it is however fairly manoeuvrable for a ship its size. Despite this you must remember the River class is no small vessel, you need to be aware of your surroundings the likely direction of enemy torpedoes if you wish to avoid them in time.

The primary armament of the River class consists of two Mark XIX 102 mm cannons, located at the front and rear of the ship. These are powerful cannons at the River class's battle rating; the HE shells can cause devastating damage to torpedo boats and sometimes kill them in single shot. Even against larger ships the HE shells can cause significant damage, which coupled with the high rate of fire (3 - 3.9 second reload depending on crew) allows you to kill enemy vessels very quickly.

The River class has a very powerful secondary armament of two 40 mm QF Mark VII auto-cannons. These are mounted in turrets on each side of the ship, just aft of the mid point. The positioning of these turrets mean they can both engage vessels on the same side, in an 80 degree arc from the front of the ship, this allows them to cause substantial damage to enemy ships within this area.

In addition to its 40 mm secondary turrets the River class also has a pair of single Oerlikon Mk.II 20 mm auto-cannons mounted on each side of the bridge for anti-aircraft use. The Oerlikon's have a decent rate of fire and damage and are more than capable of taking down most aircraft you will face with little issue. It is also possible to use them against lightly armoured enemy ships, however their damage is fairly limited and their mediocre gun depression coupled with high mounting location means they cannot effectively engage targets at less than about 200 m range.

When taken into battle with the small ships the River class can be used as somewhat of a brawler. You can use your large calibre guns to devastate smaller torpedo boats (if you can hit them) and use the secondary 40 mm cannons to consistently shred fast moving targets. The River classes large size, some armour, and fairly large crew means it can take a reasonable beating, however ships of powerful auto-cannons can still rapidly deplete your crew, and short range torpedo attacks are always a major threat.

A safer option can be to keep out of the immediate area of the main fight use your impressive armament to rain down destruction from a distance, while being somewhat safer from enemy return fire and torpedoes.

The River-class frigates were developed in the early 1940s on the same premise as the preceding Flower-class corvettes; quick and cheap to build convoy escort vessels which would protect merchant shipping in the North Atlantic from the ever growing axis submarine threat. Unlike the Flower-class corvettes however, River-class frigates were larger, had a longer range and were overall more suitable for operations in the North Atlantic.