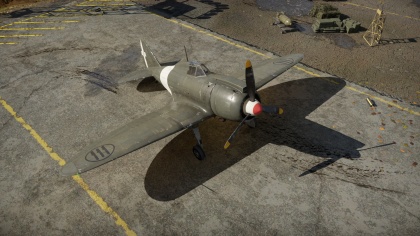 Given its low manoeuverability, bad climb rate and low speed, the Re.2002 should be used as a single-seat attacker. For this purpose it can carry quite a formidable payload for its size and tier - a single 250kg bomb and up to 2× 100 kg bombs. In the air RB, this payload will come in handy for destroying a pillbox or two or knocking out some tanks, using your MG armament against softer targets.

However, it is in the tank RB where the machine is truly useful. Given its low BR, its top payload is fully able to destroy any tank on the given BR spread and its 250kg bomb has enough punch to knock out multiple targets if you're lucky (or skilled) enough to hit a cluster of thin-skinned vehicles. You can also use the Re.2002 as an impromptu dive bomber with the advantage of being able to defend itself against enemy fighters. But don't mistake the Re.2002 for a proper CAS plane, as it lacks the payload and the armour protection for repeated attacks, especially against prepared AA defense. The Re.2002 is thus great for hit and run attacks, after which you can either return to your airfield and rearm, or you can climb a little and try to pick off any sneaking enemy CAS aircraft.

With a subpar agility, climb rate and speed, but possesing a good payload for its tier, the Re.2002 is an attacker disguised as a fighter and should never be brought into a direct dogfight