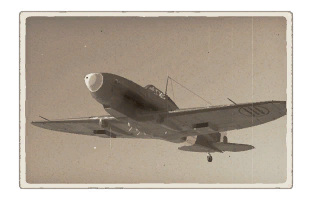 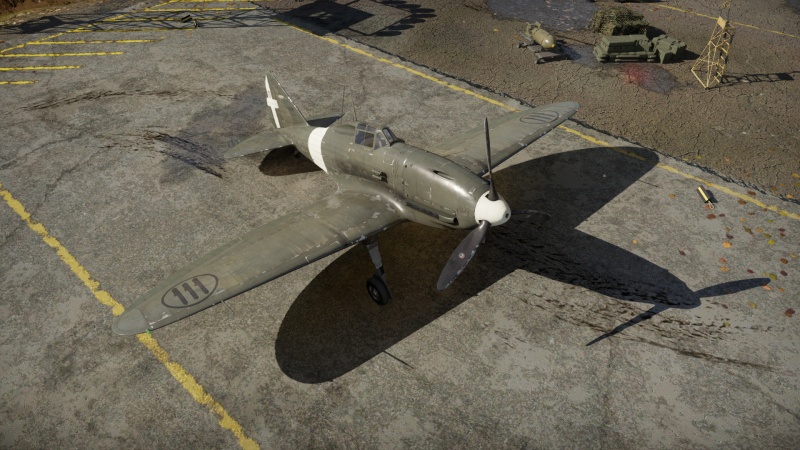 The Re.2001 CB is a modification of the Re.2001 serie 1 into a fighter-bomber. The changes consist of bomb racks and bulletproof glass, which introduce minor performance penalties but make the aircraft much more useful against ground vehicles. The CB is a good choice for mixed battles, where its 250 kg and 100 kg bombs can do considerable damage against low rank vehicles.

The Re.2001 CB's performance is generally similar to the Re.2001 serie 1. The top speed and climb rate are slightly worse owing to the weight of the new features. But the general characteristics of the serie 1 still apply. It is a fairly well rounded aircraft with good turning capabilities and average to below-average speed. The climb rate, roll rate, and energy retention are all decent.

The Re.2001 CB now has fairly thick bulletproof glass to protect the pilot from the front, something the serie 1 sorely lacked. Pilot snipes in head-ons are less of an issue, but still keep in mind that its water-cooled inline engine cannot take much punishment. The distribution of the fuel tanks also makes it easy to set the Re.2001 on fire, which is usually fatal.

The Re.2001 CB can be outfitted with the following ordnance:

The Re.2001 CB was designed to carry bombs and it does a good job in this regard. It actually carries a heavier maximum bomb load than the contemporary F.C.20 Bis twin-engined attacker. The 250 kg bomb has good explosive effects and is sufficient for destroying at least a single tank in combined battles, perhaps more if they are lightly armoured and closely bunched together. The 100 kg bombs require some more precision but are still large enough to be useful, especially against soft targets. The 50 kg bombs should be avoided as they will require almost a direct hit to destroy armoured vehicles.

The Re.2001 CB can be used in air battles as a fighter since it does not differ greatly from the original Re.2001. In this role, it should be primarily used against other fighters as opposed to hunting bombers or heavy twin-engined fighters because of its lacklustre guns. It is best to drag opponents into extended engagements since it is unlikely that the Re.2001 will be able to destroy a target in one pass.

At the start of a match, try to climb and gain some altitude. If using MEC, open the radiators fully and keep an eye on the engine temperatures. If things get too hot, dial back the throttle and let the engine cool off. Scan around for enemies. The best targets are those that are fragile, less manoeuvrable than the Re.2001, and at a lower energy state. If you have a significant altitude advantage over your target, dive in, make a pass, then loop around. Repeat until your target has lost significant energy, then try to jump on their tail and hose them down with the machine guns. If you can force them to constantly manoeuvre and corral them into a turnfight, the results will usually be in your favour. A faster opponent that chooses to run instead can be difficult to dispatch. In that case, let them go and start climbing to reset the engagement.

The Re.2001 CB will fare better in head-ons compared to the original Re.2001, but committing to head-ons is still risky. Enemies with high-velocity machine guns or cannons are likely to damage you first, so only go all-in if your target has poor armament and using a fragile plane. Otherwise, fire off a burst, break off early, and observe what your target does after the merge. If they commit to a turnfight, again try to latch onto their tail. If they continue their course and are fast enough to escape, let them go and try to conserve your own energy.

Be wary of engaging targets that are as or more manoeuvrable than the Re.2001 in turning engagements. Try to obtain an altitude advantage before engaging and stick to boom-and-zoom or energy fighting tactics instead of flat turning. A Spitfire can put up a very tough fight if it has the same energy level as the Re.2001, but as with any plane, it becomes less threatening with less altitude and speed. Other targets that should be attacked with caution include planes with decent defensive armament like the IL-2 M-82. There is a very real chance that the IL-2's rear gunner can ignite or pilot-snipe the Re.2001 more quickly than it can whittle down the "flying tank" in turn. Large bombers with multiple engines and gunners are similarly hazardous. If you must engage these, try to set their engines on fire and break off.

It is generally best to leave ground attack duties to actual attackers like the Stuka since the Re.2001 CB does not have an airspawn, but if one insists on lugging bombs for destroying vehicles or finishing off a base, fly carefully and try to avoid attention. The performance of this aircraft suffers while it is carrying bombs and the engine overheating problems pose a major issue on extended trips to and from the front lines. Be careful of AAA emplacements and vehicles, even a few hits can cause oil or water leaks that necessitate a return to base.

The Re.2001 CB is the most useful in Ground RB, where its good bombload can finally be put to good use against player-controlled vehicles. Take the heaviest loadout, and upon spawning in, look around for choke points or sniping positions where stationary enemies are likely to be located. Once you have identified your target(s), enter a fairly steep dive and release the bombs shortly before you pull up. This approach is recommended since the Re.2001 CB's bombs do not have a generous blast radius; dropping bombs in shallow dives tends to be less accurate. After the bombs have been expended, examine if there are any enemy aircraft around. The Re.2001 has sufficient performance to deal with most other contemporary fighters and its overheating problems are not as egregious in the short duration of Ground RB battles. Just be careful of engaging aircraft with defensive armament. If the skies are clear, either return to base for another set of bombs or strafe targets to mark them for your team. Note that the Breda-SAFAT heavy machine guns have poor ballistics and poor penetration that drops off shockingly quickly, so the only ground targets that can be reliably harmed by the Re.2001's guns are those that lack roofs. Be careful when SPAA vehicles are active since the Re.2001 is poorly protected.

As with other Italian fighters, a large number of Re.2001 variants were explored. The Re.2001 CB was a fighter-bomber variant equipped with bomb racks, produced after late 1941. It was capable of mounting 100 kg and 250 kg bombs. Limited numbers of Re.2001 CBs were delivered to the 22° Gruppo, who later deployed to Malta to join in bombing raids against British forces. However, the Re.2001 was primarily used for bomber escort and other air combat roles and there is little information about the fighter-bomber exploits of the CB model.

Though the Re.2001 proved to be a capable fighter against RAF Spitfires and Hurricanes, attrition dwindled the numbers of Re.2001s in Italian service over time. It was never produced in large numbers due to the difficulty of its construction and the limited availability of engines, which were prioritized for the C.202 instead. Only 71 Re.2001s were operational by the summer of 1943 and the Allied invasion of Sicily cut their numbers further. The Italian armistice in September 1943 saw a portion of the 33 surviving Re.2001s transferred to the new Co-Belligerent Air Force, where they fought alongside the Allies against the Italian Social Republic and Nazi Germany until the end of the war. Combat aside, they were also used on a few occasions to carry money in underslung containers.