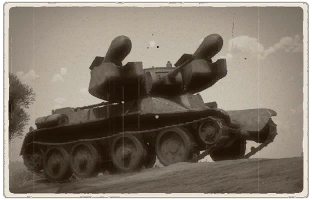 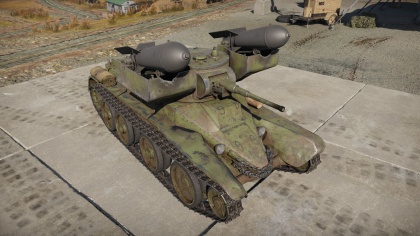 The RBT-5 is a premium gift rank I Soviet light tank with a battle rating of 1.3 (AB/RB/SB). It was available as a prize during the 2016 "Thunder League" eSports tournament as a giveaway prize for watching the Twitch stream, later every Dog-Tag owner who voted for Team Dislike earned one due to the "Champion" prize. It is currently available through the Gaijin store for individual sale or through the 'Project-X' trophy.

The RBT-5 is really flexible when it comes to the usage, as it has great mobility and firepower, which is pretty much all you need for a good tank. Given its great 53 km/h top speed, it is good to use the BT-5 as a point-capping tank at the start of the match. It is better to travel on-road to fully utilise its speed to get to the point before the enemies do. Another good tactic is to manoeuvre to the flank of the frontline / point and attack from the side. Its speed makes it possible to go the furthest with the shortest time, surprising the enemies.

Once capped, the player can either quickly ambush behind a nearby cover waiting for the enemy to re-cap it, or just drive around the battlefield and help the teammates. Its 70 mm penetration and 29 g TNT will one-shot pretty much anything around its BR. If not, the 3 second reload allows it to finish them off easily. A sudden, close encounter is a hard test to the player's skills because the BT-5 isn't very good at turning as its tracks are quite long and narrow. Its turret traverse of around 11 deg/sec is certainly not the best. Thus those two factors can sometimes cause the death to the BT-5 so the player must respond fast and accurate.

Skins and camouflages for the RBT-5 from live.warthunder.com.