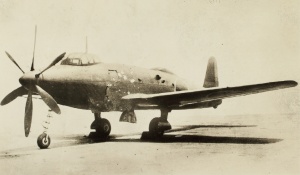 After the cancellation of the R1Y design due to disappointing performance estimates, Yokosuka Naval Arsenal further developed a high-performance high-altitude reconnaissance aircraft with a maximum speed of 740 km/h and a cruising range of 3,333 km or more.

In 1945 the first R2Y1 prototype was completed, and test flights were scheduled for May at Kisarazu airfield. During the first planned test flight, there was an engine malfunction and was rescheduled. A fire broke out in the engine room during the second test flight, and an emergency landing had to occur. The total flight time of the flight was 10 minutes, and the plane was only slightly damaged.

After the test flight, the plane was up for repairs to replace the engine but was bombed during the process. The first prototype plane was the only R2Y to be completed. There was a second plane in the makes, but it is rumoured to have been bombed together with the first prototype and couldn't be outfitted with a Ne-330.

For the jet attacker conversion, there were two plans to outfit the engine on the R2Y, the first being to hang two engines on the wings and the latter to build in the engine with the fuselage and have the air intake in the nose to feed two jet-engines in the back of the fuselage. These plans are speculation, and the reality of these vehicles is unclear, like many other Japanese prototypes.