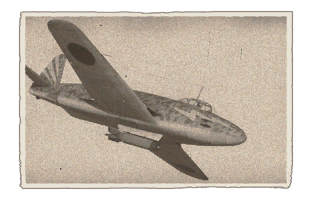 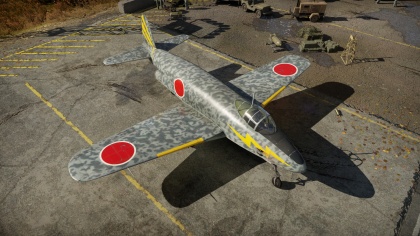 Even though the R2Y2s are able to equip 800 kg bombs, they wield a powerful set of 4 x 30 mm Type 5 cannons, mounted in the nose. This aircraft trio is similar to the Me 262 series as they all lack an engine or propeller in the front of the plane. Thus, the R2Y2 and its German counterpart wield an impressive set of cannons. However, unlike the legendary slow firing, low muzzle velocity Mk-108s in the 262, the R2Y2 series wields Type 5 cannons with a much larger ammunition pool. Although their rates of fire are comparable, this fact of a higher ammunition count allows the R2Y2 to be able to destroy large amounts of aircraft without having to return to base. In arcade battles, having a large ammunition pool is also useful as it will often be unnecessary to reload.

The R2Y2 series of aircraft features a devastating battery of weapons mounted centrally within the nose. Much like the Me 262, the lack of a piston engine mounted within the nose allows for much larger cannons to be placed within the space it would have occupied. 4 x 30 mm Type 5 cannons with a ammo load of 600 rounds (150 rounds per gun) means the R2Y2 is effective at almost any role it is played as. Attacker or interceptor, the R2Y2 is an effective multi-role aircraft for the Japanese at rank V.

The R2Y2 is best utilized as a medium altitude fighter in all gamemodes. Due to its lackluster acceleration, gaining airspeed as early as possible is crucial. Once the R2Y2 pilot loses his or her speed, they are easy prey for fast-accelerating planes like the F7F. It is important to always have a high speed when attacking enemies as they will often be able to slot in on your tail in a matter of seconds. This short time can be a matter of life or death as many fast-turning propeller aircraft such as the Spitfire wield impressive armaments with high burst masses. However, these advantages can be nullified once the R2Y2 pilot has the ability to dive away at high speeds.

If tailed, it can often be difficult to evade enemies with this aircraft, jet engines or not. Many propeller planes like the Tempest can easily stay with a diving R2Y2. If found in this situation, the R2Y2 pilot has a few choices. One, the best method is to call for teammate assistance. Not only can one keep the enemy greedy and focused on his or her tail, but this pilot can also "set up" that enemy for a teammate to destroy. If found alone, it can be possible to catch propeller planes in a "speed trap" where once the jet starts to outrun the enemy, pitch up to gain altitude. Once the enemy prop stalls out, dive on them. If the first pass doesn't result in a massive fuel fire and explosion, set up the same approach as before. Even if the propeller plane has the ability to outmaneuver the R2Y2, it is still very daunting to have to dodge an aircraft armed with four 30 mm cannons.

The R2Y2 was a jet powered version of the R2Y1 designed by Kugisho. Known as the Keiun or Keiun-Kai ("Beautiful Cloud" in Japanese) the aircraft would be a high speed jet-bomber/attacker that could be used in the defense of the home islands of the Japanese empire. The powerplant of the jet Keiun-Kai would be a pair of Mitsubishi Ne-330 turbojet engines mounted in pods located, with one under each wing. Compared to the Version 1, the V2 features the jet's air-intakes in the wing roots and the engine in the tail-beam similar to the F9F. The major advantage of this setup is the reduced air drag resulting in both better top speed and better acceleration. With the increased height less lawn and small stones can enter the jet engines, a common problem in WW2 as most military air ports were plain lawn fields. However the big disadvantage is increased maintenance time form the far more complicated engine arrangement. Further storage places for fuel get sparse. The last version V3 would feature a nose mounted air-intake with the engines remaining centrally mounted within the fuselage. 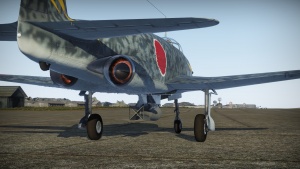 The fuselage mounted engine configuration of the V2

The Y-40 project began with failure of the Kugisho R1Y1 (Y-30) project for a fast, high speed reconnaissance aircraft. The development of that project, along with inspiration from the German Heinkel He 119, the R2Y (Y-40) project was developed. Initially intended as a fast reconnaissance aircraft with a long range that could be operated from land bases across the Japanese Empire, that would avoid interception with high speed flight, however Kugisho also informed the IJN that the aircraft could be adapted to other roles. They proposed that the planned Aichi Ha-70 engine powerplant of the R2Y1 could be replaced by a pair of Mitsubishi Ne-330 turbojet engines. Nonetheless, work on the R2Y1 continued, however it proved troublesome due to the Aichi powerplant. Issues with the R2Y1 airframe, its powerplant and interference from American bombing prevented the development of the project past the piston engined variant. By April 1945 the first prototype of the Keiun was ready for initial trials, with the first flight in early May of the same year. The R2Y1 suffered engine-cooling issues during its early development, and a fire occurred during ground-testing that would damage the aircraft and its powerplant.