Difference between revisions of "R-boot R-130" 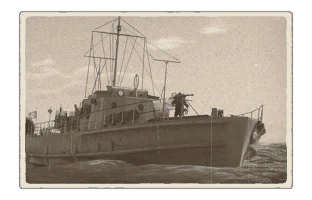 The Räumboot R-130 is a rank I German minesweeper with a battle rating of 1.7 (AB/RB/SB). It was introduced in Update 1.79 "Project X" as part of the fleet closed beta test.

The R-130 is constructed using wood, the superstructure is hardened wood constructed to a thickness of 12mm. The wooden construction of the R-130 means fire is one of the biggest threats to the survival of the ship, the hull will not absorb so much damage. There is no armour on the ship. The R-130 has a crew placement of 41, which provides a great attachment of sailors, which helps to increases the overall survivability of the R-130 dramatically compared to other ships in this tier.

Compared to the previous version R-boot R-41 which only offered two single 2 cm/65 C/30 (20mm) automatic cannons. The R-130 has increased its armament with the addition of a single 3,7 cm FlaK-Lafette C/36 (37mm) automatic cannon. This substantially increases the firepower, by allowing for heavy and harder-hitting rounds. It also provides an additional benefit that it helps to increase the survivability of this vessel.

However, the internal components of the R-130 are spaced out, meaning a good volley of enemy fire will not completely incapacitate the ship.

The R-130 is slow in comparison to other naval ships at this tier, however, it is equipped with a Voith Schneider propulsion system which makes up for the slow top speed. The Voith-Schneider Propulsion system empowers the R-130 (and R-boot R-41) with a top speed of 50 km/h in arcade battles. In realistic and simulator modes, it has a top speed of 37 km/h, which is still respectfully fast, for a naval ship. Unlike other ships which use a conventional propeller & rudder system, the Voith-Schneider Propulsion (VSP) system uses a "cyclorotor" which provides incredible manoeuvrability, allowing incoming enemy fire and torpedoes to be dodged, just before they are about to impact the ship, without delay, whilst keeping the top speed almost the same. This effect is only partially modelled as of upgrade 1.99.

The two cm/65 C/30 (20 mm) automatic cannons are equipped with a 40 round magazine. To best utilise the cannon in a naval battle environment, ideally use universal or the APT magazine choice. These provide the most stopping power in a ship to ship encounter. When operating the cannons, aim in front of the enemy ship, and adjust the fire by watching the tracer rounds hit the target. Locate the key areas which are important for the rivalship to survive and target those i.e. Bridge, Engine room, Ammunition storage areas.

When engaging enemy aircraft, the cm/65 C/30 (20 mm) automatic cannons are able to deliver a catastrophic blow to any enemy aircraft, which may decide your attack. The hitting power from these rounds, make this one of the most powerful anti-air deterrence in the game. With a few well-placed shots, Aim for the wing spars and engines the enemy aircraft will soon be destroyed.

The 3,7 cm FlaK-Lafette C/36 (37 mm) automatic cannon, is classed an auxiliary gun. The 37mm is placed on the stern (rear) of the ship, it has a great arc of fire. This can cover almost all the ship except for the bow (front), however, with the great agility of this ship with some careful manoeuvring it is able to overcome this hurdle.

To get the best performance out this while engaging enemy aircraft and ships using the 3,7 cm FlaK-Lafette C/36 (37 mm) is able to make short work of any irritating aircraft, without delay. It is suited to close and medium-range targets. However due to the impressive reload rate of this cannon, which only holds five rounds of ammunition per magazine, it is able to switch in between HET and APT in virtually no time. With the 3,7 cm, FlaK-Lafette C/36 (37 mm) has a reload speed from 0.25 to 0.13 seconds, in order to get the fastest time being classed as an auxiliary gun To achieve the stupendous 0.13 second reload time, the crew requires an ace qualification, with crew skills to be fully achieved in the auxiliary gun reload speed field.

The WBF depth charge, holds 60kg of an explosive charge, it is a great weapon in the hands of a skilled captain, the depth charge can be placed to cause destruction to enemy ships by exploding below. The only reason the depth charge should be used on these types of ships is if enemy ships get to close. Depth charges are more inline to be a defensive weapon, instead of an offensive weapon. This ship uses the Voith Schneider propulsion system which provides incredible manoeuvrability, it is very easy to manoeuvre the bow where these are placed and drop them all under the enemy ship, causing the rival to explode.

The R-boot R-130, is long, lacks armour, but is highly manoeuvrable with it's Voith Schneider propulsion system. This empowers sharp and fast turns which allow the ship to make sudden broadsides with its great armament which is able to accurately knock out an enemy target with a good range. The propulsion system, allows enemy shells to be dodged and courses changed, putting enemy range finders to shame.

It is important to turn the ship into them, keeping the profile small until you are within range to turn the ship broadside to bear the powerful cannons on to the opposing ship. If it is possible to get as close as you can, then drop some depth charges under them to knock them out with a splash! The 20mm autocannons, when using the cannons, make sure to track each round and adjust them - as soon as the rounds start hitting they will be dealing damage to the enemy ship or aircraft. When using the 37mm autocannon, it's short clips and supersonic reloading times, allow it to dominate the sea battle.

To take advantage, it is recommended that you put the Primary armament under command of the game A.I. system and control the 37mm yourself, this will allow you to command the battle. Or take command of all the guns yourself, beware - you will need to stay very alert and keep an eye out for air and small boats which may try to sneak up and knock you out.

The most dangerous foes which this ship could face is are small fast attack and cannon equipped ships such as the G-5, which small profile and incredible manoeuvrability allow it to get close, it packs a powerful 12.7mm machine gun or for the G-5 (ShVAK) which features a 20mm cannon!

The BMO, Pr.1124 and others like this, offer a sleek stealthy silhouette which can be hard to detect and could be easily missed in the heat of battle. Which can also be hard to knock out since they are armoured very well with armour plating. These ships also offer firepower which can knock out some of the biggest and meanest ships, with some well-placed shots, Flower class, PC-451 are also to be watched out for.

These ships can be countered by knocking out the main armament, first with well-placed shots. Once this is done, aim for the centre of the ship, and bridge area was the majority of the crew is located and fire up down its length until it is knocked out.