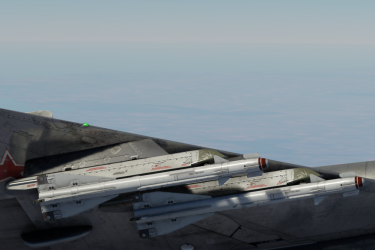 The R-60, a short range infrared homing missile, is usually most effective at ranges between 800-2,200 m (at sea level). The burn time of the R-60's propellant is 3 seconds. Compared to other missiles, the R-60 accelerates slower but for longer when comparing to other missiles (the AIM-9Js fuel last for 2.2 seconds with more force, R-60s having 3 seconds but with less force). The R-60s have better total-force-to-weight ratio when compared to the AIM-9Js. Comparing the AIM-9Js to the R-60s, R-60s have almost half the weight of the AIM-9Js, meaning the R-60s pulls better at lower speeds and higher altitudes.

It is also important to note that this missile can uncage its seeker which allow the user to lead the target before launching.

When compared to the AIM-9Js, the R-60s have double the inner FOV of the seeker head, meaning it is easier to acquire a lock when doing turning engagements, though this comes at the cost of being able to be fooled easier by flares and other counter-measures, since these may come into the view of the missiles (This is also the reason why AIM-9Js are less likely to be fooled by flares when compared to R-60s).

Due to the Poor 1.15 kg of TNT, R-60 requires direct hits or very close detonation in order to deal sufficient damage, especially when compared to missiles such as Aim-9J wich have almost 5x the TNT.

Compared to the most common Air to Air missiles such as Aim-9J or R550 Magic, R-60 tends to have the upper hand in most chasing/dog fighting scenarios, due to its extended turning capability possible through the long engine burn time and high G tolerance of no more than 30G.

Use of slaving the missile to the radar may prove to be incredibly useful when leading a target, especially when the dogfight continually changes angles and pointing the nose towards the target may not be possible.