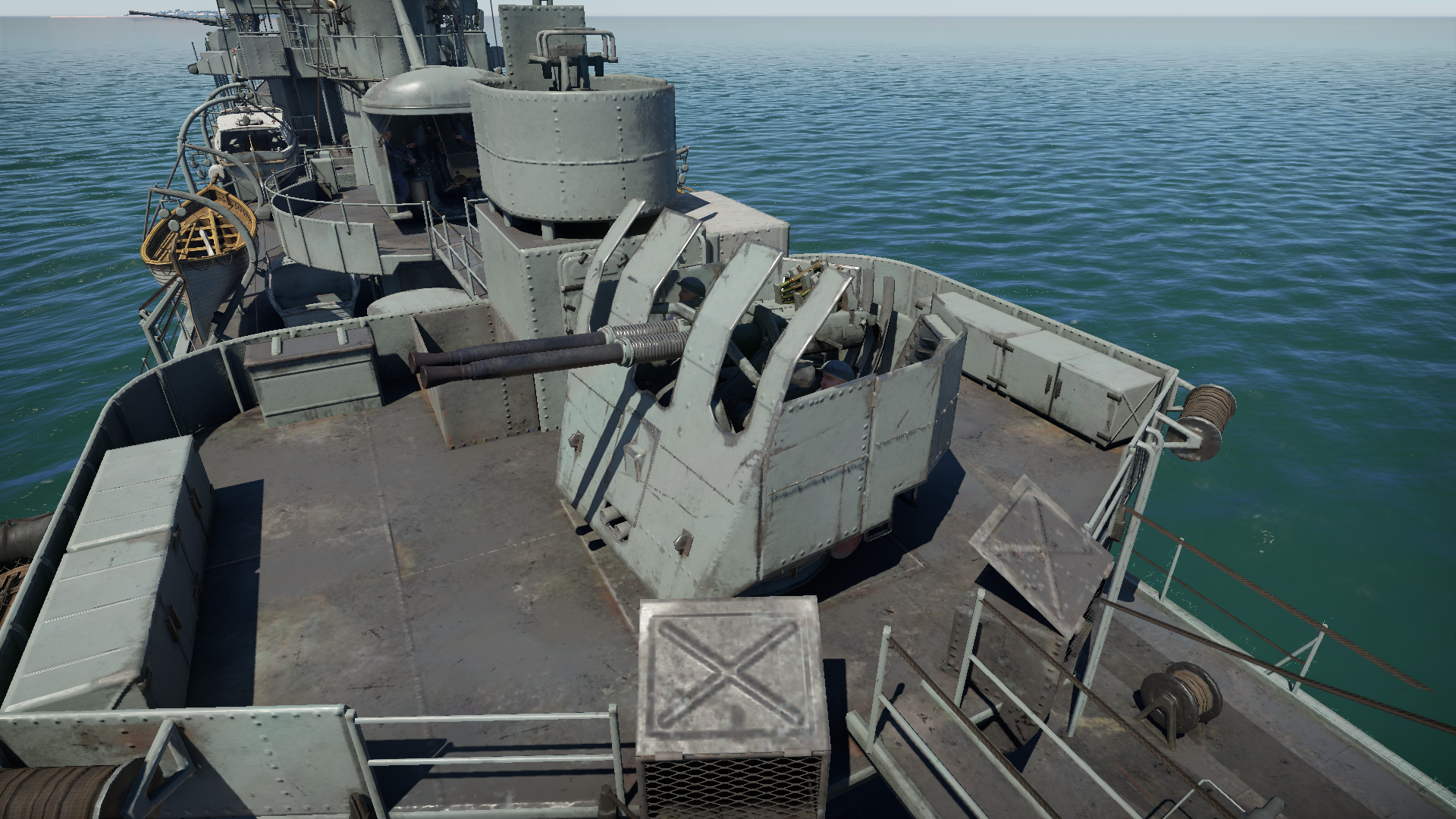 The QF Mark V is a naval twin anti-aircraft mounting that consists of two water-cooled, British-produced Bofors 40 mm L/60 guns. The Bofors 40 mm L/60, also known as the "Bofors L/60", the "Bofors gun", or simply "the Bofors", was a highly successful anti-aircraft gun design of the interwar period and was widely used during the Second World War by both sides and in all theatres and remained in service long after the end of WWII.

Each gun of the two guns in the QF Mark V has a barrel diameter of 40 mm and has a barrel length of 2.25 m. They have a magazine size of 4 rounds per gun and have a rate of fire of 156 rounds per minute per gun, though firing for too long will jam the gun.

All naval Bofors 40 mm guns are virtually identical, the only difference between them being the number of guns in their respective mounts. They all fire the same ammunition from 4-round ammunition clips and have a short enough reload that they can sustain virtually continuous fire. In other words, their cyclic rate of fire (mechanical rate of fire) is practically the same as their effective rate of fire (rate of fire with reload times taken into account). All naval Bofors 40 mm guns can jam if fired for too long.

A twin mount of one of the best medium-range anti-aircraft cannons in the game, the QF Mark V provides very good AA coverage for any ships that it's mounted on. With a 0.0986 kg TNT equivalent explosive charge in each HE round, any hit on an enemy aircraft will usually result in critical damage, if not a kill. The rounds that these guns fire have an above-average muzzle velocity and projectile mass, resulting in a much longer effective range than guns of similar calibre: laterally (i.e. targeting surface targets), the maximum range is about 3.25 km.

Despite each gun's small magazine size of only four rounds, the reload is short enough that there isn't any noticeable difference between its cyclic rate of fire (the rate of fire only considering the mechanical speed of the gun) and its effective rate of fire (the rate of fire accounting for reload times). In other words, they can sustain virtually continuous fire, as if there was no reloading at all. However, this comes at the cost that if fired for too long, the gun can jam. For this reason, it can be advantageous to set the AI gunners to only target aircraft. If allowed to target surface targets, the AI gunners will often waste ammunition on targets well outside of the gun's maximum range, leaving the guns jammed when actually needed.

Since the QF Mark V can currently only be found on destroyers and cruisers, if the choice is available, there is no reason to use any ammunition option other than 40 mm HE clips since it contains the highest ratio of HE to AP rounds. While the AP rounds do have the highest penetration compared to other similar guns, armoured targets can more effectively be dealt with using the destroyer or cruisers main armament.

In 1928, the Swedish Royal Navy contracted the Bofors Company to design a suitable replacement for their Vickers 2-pounder guns anti-aircraft guns (the Vickers "Pom-Poms"). Work on the design began right away and a prototype model was produced by mid-1930. The prototype had a vertical sliding breech block design and was automatic. Upon firing, the recoil of the gun would open the breach and eject the spent casing out its rear whilst an autoloading mechanism would insert the next round into the empty breach, after which the action of the gun sliding back into place would close the breach once again, leaving the gun ready to fire once more.

The Mark V mounting was a twin mount using the US Mark 1 twin mount as a base, interchanging parts from existing gun mount designs where possible. The Mark V mount (designated "RP50 Mark V") featured two Mark XI guns (designated "Ordnance, Quick Firing 40 mm Mark XI") fitted side-by-side, though many of these were actually Mark IV or Mark IV/I guns converted to the Mark XI standard. The original air-cooled barrel of the Bofors L/60 would overheat after firing approximately 300 rounds and would need to be replaced mid-battle to continue firing; the Mark XI was water-cooled to help alleviate this issue, and the Mark V mount had water tanks and pumps to circulate the coolant through the guns' water sleeves. The Mark V mount, like many other Bofors gun mounts, was also designed to sync with a central fire control system. In total, the Mark V mount weighed 6.5 tonnes. It could elevate -15°/+90°, although this was changed to -14°/+90° post-WWII, and could traverse horizontally and vertically at a rate of 35°/s and 28°/s, respectively.

Like its American counterpart, the Mark V used two mirrored versions of the Mark XI, one for each side. These were trained by two crewmen, one on each side of the twin guns each with their own spider gun sight. The crewman on the right was the gun trainer who traversed the gun horizontally by rotating a crank, while the one on the left was the gun layer who traversed the gun vertically in the same manner and who also fired the gun, which he did through by pressing a foot pedal. Ammunition for the Bofors gun came in 4-round stripper clips, with both HE and AP clips available. At the rear of the Mark V mount were two small ammunition racks that could each hold six clips. Ammunition was loaded by the other crewmen through the top of each gun into the guns' automatic loaders, which would automatically strip the rounds from the clip. After firing, spent casings were ejected out the rear and guided down chutes directed towards the front of the guns where they could safely be flung away from the crew, all whilst the automatic loader fed in the next round.

The Mark V mount, commonly known as the "Utility" mount, entered service in early 1945, replacing the much more complex Mark IV twin mount. The Royal navy estimated that the Bofors gun was about twice as effective as the Vickers 2-pdr Pom-Poms against bombers, though against kamikaze aircraft, they were estimated to have about the same effectiveness. Nevertheless, they were well-liked by their crew and remained in service long after the end of WWII.