Difference between revisions of "Pz.IV J" 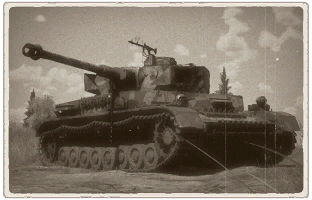 The Pz.Kpfw. IV Ausf. J (Panzer IV J) is a Rank III German medium tank with a battle rating of 4.3 (AB) and 4.0 (RB/SB). It was introduced in Update 1.43. A retrograde of its predecessor, the Ausf. J removes the powered traverse for a simpler manual one, though retains the 75 mm L/48 gun for the same lethality.

The Panzer IV Ausf. J is a shadow of the infamous Ausf. F2 variant. The tank has a new gun which doesn't have that much of a difference, and the armour is lacking. With 80 mm of armour at the front, the Panzer IV J will be an easy target for IS-1, M4A3E2 Jumbo, KV-2s and many other powerful tanks. But despite those flaws, Ausf. J can still pack a mean punch for enemies that might not take too much notice. The fact that the Panzer IV J will be thrown against more powerful opponents can be an advantage because many players would rather focus on the most lethal threats rather than a lowly Panzer IV. Ensure that the opponents are focused on the stronger tanks from the team, then flank them and engage. Using these tactics, the Panzer IV J can become a game changer. Be warned and always mindful that this tank has an utterly poor turret traverse rate. Check the surroundings and pre-aim the 75 mm gun to expected enemy positions.

The Panzer IV Ausf. J on the outside shares many features with the older Panzer IV series. It brings back the distinctive Dunkelgelb yellow coat on the default body (and would be changed with alternate camouflages), has a double-baffle muzzle brake on the 75 mm KwK 40 L/48 gun, and still has the turret offset to the left of the main body. The Schürzen skirts are only present on the turret, the hull left exposed without the skirts.

Though some details are seen distinctive to the Panzer IV Ausf. J model compared to the others. The biggest sign is in the number of return rollers on the top tracks, reduced to three instead of the usual four. On the turret top, the presence of a Nahverteidigungswaffe discharger was present next to the turret ventilator. The commander's hatch on the cupola is also now a one-piece design rather than the usual two-piece design. The wheel rack on the hull left side is repurposed to hold extra jerry cans.

Alternatively, aim at the Panzer IV from its long vulnerable sides in cases where its slow turret traverse cannot keep up with a flanking maneuver or catching it in an ambush. The interior is fully stocked with ammo racks even when the user is taking a minimum load. Moreover, the fuel tank resides at the very bottom of the center of the tank, so a penetrating shot with APHE will either detonate the ammunition, set the tank on fire, or knock out a good portion of the crew, if not fully destroy the tank with all three effect.

Tactics-wise, the Panzer IV J is perfect for sniping and ambushes, where the slower turret traverse rate affects its combat performance less. Attack from a distance, especially while that enemy is focused on other allies in the team. Ambushes can also work in close-range events when watching corners, street intersections, and chocke points, but be wary of any enemies trying to outmaneuver the Panzer IV J as it would require drastic action with the slow turret rate. Try not to engage the enemy in a straight-up front confrontation as most enemies would be able to easily cleave through the front armour and end the vehicle.

Although any tank of the Rank 3 can destroy the Panzer IV J pretty quickly, the tanks that mostly need to avoided in open combat are IS-2s, KV-2s, SU-152s, Tigers and Panthers.

Most of the heavy tanks that it will face include Tigers, the last of KV series, IS-1s, and even some IS-2s. Particularly IS-2s will be the toughest opponent, and will take out the Panzer IV with one hit. Avoid frontal confrontation at all cost. Instead try to be sneaky and attack them from the sides when they become vulnerable.

As with most tanks make sure to research Parts and FPE. Then focus on researching Pz.Gr. 40 (APCR shells) so the tank can stand the chance against heavily armoured vehicles like the Panther. After progressing this far into the unlock tree artillery should be taken swiftly as well. Accuracy is decent, so sidestepping over to the mobility upgrades to address the bad acceleration is not a bad idea, in particular filters and transmission are useful.

The Pz.Kpfw. IV's was designed and approved for production in 1936. Envisioned as a support tank, it was equipped with a 75 mm howitzer at its initial stages. MAN, Krupp, and Rheinmetall-Borsig worked on the development of the Panzer IV, with Krupp's model finalized as the basis of the Panzer IV, using a leaf-spring double-bogie system for its suspension. The main armament was the KwK 37 L/24 75 mm howitzer. The vehicle held a crew of five, the commander, gunner, loader, radio operator (and hull machine gunner), and driver. Though it looked symmetrical, the Panzer IV turret was actually offset to the left of the chassis center line a bit while the engine was also offset to the right, this was to allow the torque shaft to turn the turret. The offset also meant that more of the ammo is held on the right side of the tank in storage areas. Nevertheless, the Panzer IV, with about 8,553 units made from 1936 to the end of World War II in 1945, it remained as one of Germany's main battle tank of the war, despite newer replacements such as the Panther tank.

The Panzer IV started with only minimum armour, 14.5 mm on the Ausf. A. This was upgraded to 20 mm on the Ausf. C. As the war moves on to 1940, the 20 mm armour was deemed insufficient, so 30 mm extra steel plates were bolted or welded on on the Ausf. E variant, becoming a permanent feature as a single 50 mm plate on the Ausf. F. As the war moves to the Invasion of Barbarossa, the German tank forces were unprepared for the appearance of the Soviet T-34 and KV-1 tanks, which could shrug the 75 mm howitzer on the Panzer IV. An upgrade was done on the gun to mount the newer and better KwK 40 L/43 cannon on the Ausf. F2, which balanced the disparity on tank firepower. The Panzer IV was upgraded again in 1942 to the Ausf. G with an extra 30 mm steel plate applied to the 50 mm glacis, bringing the armour to 80 mm thick, plus a newer KwK 40 L/48 gun that was slightly more powerful. Then in 1943, the most produced variant Ausf. H was finalized with a single-piece 80 mm glacis plate, Zimmerit paste, and Schürzen side armour skirts.

However many Panzer IV the German Army fielded, the war was not looking their way by 1944. The Allied had landed in France in part of Operation Overlord, and the Soviet offensive in Operation Bagration had costed the Wehrmacht lots of land, personnel, and materiel. To replace the decimated armoured forces, the Panzer IV was once again revised not to be better, but for a more easily produced vehicle, the end result was a retrograde from the Panzer IV Ausf. H, the Panzer IV Ausf. J. The Panzer IV Ausf. J had the electric turret traverse and its associated auxiliary engine removed for an auxiliary fuel tank (although a dual speed hand-traverse was installed to compensate for this loss). The pistol and vision ports on the turret were removed, the engine radiator housing was simplified, a Nahverteidigungswaffe device was added for self-defense device (firing smoke or high-explosive shells on its surrounding). The armour on the tank roof was increased, the return rollers were reduced from four to three, the Schürzen skirts were changed from solid plates to wire-meshes. All of these were made to increase productivity of the Panzer IV while keeping combat survivability high.

Skins and camouflages for the "Panzer IV J" from live.warthunder.com.