Difference between revisions of "Pz.IV H" 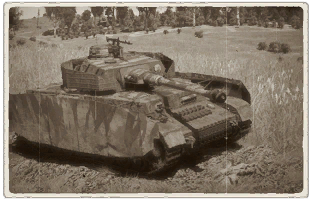 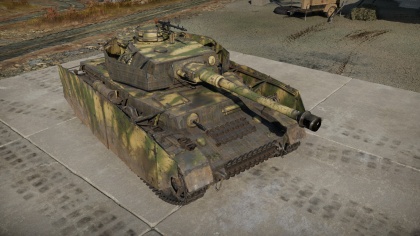 The Pz.Kpfw. IV Ausf. H (Panzer IV Ausf. H) is a Rank III German medium tank with a battle rating of 4.7 (AB) and 4.3 (RB/SB). It was introduced during the Closed Beta Test for Ground Forces before Update 1.41. The most common iteration of the Panzer IV, the Ausf. H carries the powerful 75 mm L/48 gun that can destroy most tanks at its BR. It also has side-skirts that can provide a small degree of protection to the side armour of the tank.

The most distinctive aspect of this Panzer IV compared to it's previous iterations, is that its covered head to toe in 5mm thick spaced armour skirts (known as Schurtzen). These skirts, while they won't stop much in the way of an enemy AP or APBC shell, It can give tanks like the M4A3 (105) some trouble in damaging you. There is a small mobility penalty from having the extra armour though, compared to the G and F2. So keep that in mind. It's also the first Panzer IV to get the upgraded 75mm L/48 gun. Which, while not that much of an upgrade from the L/46 on the G and F2, still packs a punch at it's BR. It also is the only Panzer IV in the game that comes with zimmereit modeled on the hull, turret, and turret skirts. This just effects the visuals though, as War Thunder doesn't have infantry armed with magnetic mines.

The Panzer IV Ausf. H is vulnerable to most front shot engagement, especially so if no serious attempt is made in compound angling. The front plate in its unsloped format is an enticing target, but beware to not hit the front sloping glacis right in front of it as that area has a tendency to bounce everything. Also avoid hitting straight into the ball machine gun and driver's port in the front as these also have a tendency to nullify an armour-piercing shot. When using APHE rounds, simply hit center mass of the front plate and let the post-penetration effect do the rest.

Alternatively, aim at the Panzer IV from its long vulnerable sides in cases where its turret traverse cannot keep up with a flanking maneuver or catching it in an ambush. The interior is fully stocked with ammo racks even when the user is taking a minimum load. Moreover, the fuel tank resides at the very bottom of the center of the tank, so a penetrating shot with APHE will either detonate the ammunition, set the tank on fire, or knock out a good portion of the crew, if not fully destroy the tank with all three effect.

This tank can be described in one word. Capable. While this version of the Panzer IV isn't nearly as renowned and feared as the Ausf. F2 variant that precedes it, it's still a very capable medium tank. The Pz.Kpfw. IV Ausf. H has a new gun that, while not that different to the guns on the G and F2, still packs a deadly punch in it's BR range. The armour is meh, with a paltry 50mm of armour at the front of the turret, and 80mm of armour at the front of the hull. This makes you an easy target for tanks like KV-2s, T-34-85 (D-5T)s, and M4A3E2 Jumbos among others. But, with some careful play and some creative use of angling, you can bounce some shots from equal rank tanks, and destroy tanks at the top of your BR range. Mobility of this tank is lacking, albeit not by much. (It is the heaviest version of the entire Panzer 4 series after all). It's acceptable, but it will still take time for it to accelerate to its top speed, as your engine is underpowered and your tracks are narrow, which results in poorer cross-country performance than comparable tanks.

The Pz.Kpfz IV Ausf. H is a capable, versatile tank, perfect for sniping, ambushing, flanking, and second line defense. Make use of it's accurate gun for hitting the enemy from a distance. But keep in mind it's weak turret armour should return fire come your way. This tank also works very well supporting heavy tanks. Hide behind a friendly heavy that can tank the damage, while you can pop out and destroy the enemy, if your teammate can't. Or you can use your decent mobility and get around to shoot into the enemy tanks flanks. In a equal BR rank or lower, you can reliably bounce shots if angled properly, but remember that frontal confrontation in a full uptier can lead to a quick end.

Tactics-wise, on a open map like Kursk, make like a true German tank and hit the enemy from range. Don't bother going in close, as your advantages lies at range. On a city map like Advance to the Rhine, go for flank routes, or stick with your heavies, giving them more firepower should they need it. Keep in mind to keep the frontal armour angled as you go around corners to bounce any shots.

Although most tanks in Rank III can destroy you pretty quickly, the tanks you need to avoid in open combat (if possible) are KV-2s, SU-152s, T-34-85 (D-5T)s, M4A3E2 Jumbos, and if you're playing in Arcade: Tigers and Panthers

As with most tanks make sure you research Parts and FPE. Then focus on researching Pz.Gr. 40 (APCR shells) so your tank can stand the chance against heavily armoured vehicles like the Panther. After progressing this far into the unlock tree Artillery should be taken swiftly as well. Accuracy is decent, so sidestepping over to the mobility upgrades to aid the bad acceleration is not a bad idea, in particular Filters and Transmission are useful.

The Pz.Kpfw. IV's creation, like its predecessor the Pz.Kpfw. III, was devised by Heinz Guderian, where he envisioned a support tank to be used to handle anti-tank guns and fortifications. The Panzer IV was to work alongside the more numerable Panzer III in Panzer Divisions (three company of IIIs and one of IVs) to engage the enemy, giving the role of fighting enemy armoured forces to the Panzer IIIs. The tank was to have the short 75 mm howiter as its main armament and have a weight limit of 24 tons. MAN, Krupp, and Rheinmetall-Borsig worked on the development of the tanks, but the Krupp's model was selected for further testing.

The chosen model from Krupp once finished used a leaf-spring double-bogie system for its suspension, doing away the proposed interleaved or torsion bar suspension system earlier devised. The vehicle held a crew of five, the commander, gunner, loader, radio operator (and hull machine gunner), and driver. Though it looked symmetrical, the Panzer IV turret was actually offset to the left of the chassis center line a bit while the engine was also offset to the right, this was to allow the torque shaft to turn the turret. The offset also meant that more of the ammo is held on the right side of the tank in storage areas. The Panzer IV was then accepted into service and production began in 1936.

In the later part of World War II, the Panzer IV in its base form was deemed inadequate against the new tanks the Allies have, the Soviet T-34 and American M4 Shermans were able to come toe-to-toe with the Panzer IV, if not better than it. Germany rapidly upgraded their Panzer IV to compete with the enemy, mainly the armour and gun. From the Ausf. C to the Ausf. G, the armour increased from the original 20 mm to 80 mm thick and the original KwK 37 L/24 75 mm howtizer to the longer KwK 40 L/48 75 mm.

The Panzer IV Ausf. H began production in June 1943. The 80 mm front glacis armour is now a single piece rather than attached via weld or bolt. Zimmerit paste is also added onto the Panzer IV hull to prevent the use of magnetic anti-tank mines. Schürzen side skirts on the hull added 5 mm thickness while the turret added 8 mm thickness, plus its application as spaced armour improved its efficiency. A common complaint of the Schürzen side skirts was that it was easy for the skirts to just fall off by brushing against foliage. The Ausf. H return rollers were changed from rubber-rimmed to cast steel. All these modifications increased the tank weight to 25 tons, and despite the use of a new suspension, the cross-country speed dropped to only 10 mph (16 km/h). Despite that, the Panzer IV Ausf. H would go on to be the most produced Panzer IV variant. These features pushed the Panzer IV's limits to its maximum capacity. An attempt to mount the Schmalturm found on the Panther Ausf. F failed and only further proved this point.

The Panzer IV Ausf. H stayed as the main German tank alongside the Panther tanks throughout the rest of the war. The 80 mm thickness of the frontal armour could withstand the M4 Sherman's 75 mm gun, and the 76.2 mm gun of the T-34. The Ausf. H served in all combat theaters past 1943, from the Battle of Kursk, to the Battle of France, and the Ardennes Offensive. Many were lost due to combat or from lack of fuel and supplies and had to be abandoned. The rapid loss of the Panzer IVs in the German inventory caused a simplified variant to be produced. Designated the Panzer IV Ausf. J, the construction was simplified and the internal mechanics was modified, but the variant is a retrograde of the Ausf. H.

Skins and camouflages for the Panzer 4H series can be found with the search term "#pz_iv_h" or for more results the general term "#panzeriv" on live.warthunder.com.