The Pz.Kpfw. IV Ausf. F2 (Panzer IV F2) is a Rank II German medium tank with a battle rating of 3.7 (AB) and 3.3 (RB/SB). It was introduced during the Closed Beta Test for Ground Forces before Update 1.41. Introducing the long 75 mm cannon onto the Panzer IV tank, the Panzer IV F2 presents the new age of firepower for the medium tank.

The Panzer IV F2 is a very capable tank on the battlefield. It can engage enemies at medium range with startling effectiveness, but at long ranges its effectiveness starts to drop.

Besides the gun, the F2 also possesses decent maneuverability. While not on par with certain Russian and British tanks such as the T-34 and Cromwell, the IV can still comfortably outflank and outspeed Shermans, KV-1s, and in some cases, unspaded T-34 models. Use this maneuverability to avoid shots and get into crucial firing positions, as the IV F2 has very poor armour compared to its contemporaries.

The armour on the IV F2 is unfortunately very bad for its 3.3 BR. Without the added tracks/armour, the 50mm front plate and mantlet is far from sufficient at stopping any shell besides HMG fire at 3.3. Use the F2's mobility to reach comfortable firing positions, and do not overexpose the thin side armour. It is also recommended to not take more than ~40 shells, the IV F2 is very vulnerable to ammo-racking with a full ammo loadout.

The most distinctive feature of this variant is a new KwK 40 L/43 gun, found with only minor adjustments on all later Pz.IV variants, as well as on some StuG tank destroyers. It is one of the most powerful guns around its BR, having both very good penetration and damage potential. Overall, this weapon is very similar to 76 mm guns equipped on many T-34s, albeit with more penetration at the expense of some post penetration damage. Unlike the main guns featured on previous Pz.IV models, the KwK 40 L/43 is quite accurate and fires at a higher velocity. With this gun, the Pz.IV F2 is more than capable of tackling any armour it faces. There are almost no tanks at this BR that are well armoured enough to withstand its gun. Factor this with good gun depression and a stable chassis and it results into an excellent vehicle. Other than the gun itself, the F2 features no other notable differences than previous models; it uses the exactly same hull as its predecessor, the Pz.IV F1. It also retains the generally good maneuverability from earlier Panzer IVs.

The tank is not perfect though. It is by no means the fastest tank at the BR, with the T-34 being almost 10 km/h faster and the Cromwell 15 km/h faster. Then there is the armour. It is flat and quite thin at 50 mm, and can be penetrated by most Rank 1 guns at 500 m or less. Angling can increase its effectiveness, but too much can expose the even thinner side armour. The roof armour is even worse, at only 10 mm, meaning that 12.7 mm AP rounds can penetrate the Panzer IV from above. This makes the F2 a good target for pretty much any vehicle on the game (except some low rank SPAA). Another big weakness that the F2 shares with its predecessors is its large commanders cupola, which only has 30 mm of protection. A well aimed HE round or APHE round can at the very least knock out the commander, if not the entire turret crew.

Due to its weak armour, enemies with 37 mm guns or larger can pose a threat. So take every enemy tank seriously, especially if they are on the flanks. In particular, watch out for tanks that fire powerful HE shells, like the SU-122 and Type 4 Ho-Ro. They will easily destroy the Panzer by aiming at the cupola, or turret armour. If the Pz.IV F2 has been uptiered then watch out for KV-1's. The Pz.IV F2 can penetrate it from the front however these spots are small and it will easily penetrate the Panzer IV while it is reloading if the Panzer does not knock out the KV-1 with one shot. 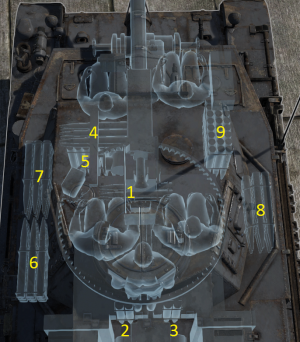 The chosen model from Krupp, once finished, used a leaf-spring double-bogie system for its suspension, doing away the proposed interleaved or torsion bar suspension system earlier devised for the sake of faster production. The vehicle held five crew members: the commander, gunner, loader, radio operator (and hull machine gunner), and driver. Though it looked symmetrical, the Panzer IV turret was actually offset to the left of the chassis center line a bit while the engine was also offset to the right. This was to allow the torque shaft to turn the turret. The offset also meant that most of the ammo is held on the right side of the tank in storage areas. The Panzer IV was then accepted into service and production began in 1936.

Despite the new gun, it had some deficiency on the tank. First is the new weight, the tank now weighed 23.6 tons, and the heavy gun in front made the vehicle nose-heavy, enough that the forward suspension springs were always under compression, causing the tank to sway even without any steering.

Most of the F2 variants saw service in either Russia, or against the Allies in Africa (though in very small quantities). In Russia, the Ausf. F could penetrate the T-34 at up to 1,600 meters now, and took part in Case Blue Offensive. In Africa, the Panzer IV Ausf. F2 could deal with all of the Allied armour available. The venerable Matilda was no match to its long range gun, and the M3 Lee was also helpless.