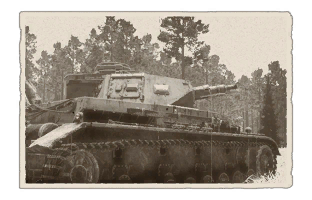 The Pz.Kpfw. IV Ausf. F1 (or Panzer IV F1) is a Rank II German medium tank with a battle rating of 2.3. It was introduced in during the Closed Beta Test for Ground Forces before Update 1.41.

Appearing in 1941 at about the same time as the PzKpfw III, Ausf. J, this model saw substantial changes. The basic armour thickness was increased from 30mm to 50mm on all front faces (hull, superstructure, turret) and to 30mm on the sides.The supplementary bolted armour was dropped. The superstructure front was changed back to a single straight plate, and the hull machine gun was changed from the Gimbal mount to a ball mount, Kugelblende 50.

In game, compared to the previous modification Pz.IV E, F1 offers enhanced armour, mostly on the turret, which used to be a "weakspot" on the E variant.

Side & Rear hull armour has been improved to 30 mm, and entire upper front hull is now a single plate of 50mm steel - while some places are actually weaker, there are no longer any "holes" in the armour easily penetrable by any gun.

Any veteran of the Ausf. C and E should feel right at home in this vehicle. Usage is the same, players should only be careful of some possible new opponents, coming from higher Tiers. In general, it is still an excellent short range corner-cleaner.

The gun is very powerful, with great rate of fire, but it suffers from low penetration. HEAT shells can be used to solve this issue, but they do a lot less post-penetration damage. The Pz.IV F1 is often capable of annihilating an enemy vehicle with a single AP shell. It has a fair amount of armour as well, however due to the lack of an actual slope it may seem considerably more fragile than some soviet vehicles when facing AP shells.

Against most threats, it is often wiser to close in with the enemy vehicle, to make targeting the weakest areas possible, increasing the chance of successful penetration. When engaging vehicles at close range, it is for example good idea to count on the slower turret speed of the soviet machines, allowing the player to circle around them with ease and deliver devastating shots. Bear in mind that while this tank can easily obliterate any vehicle at its own BR, against higher tier enemies the relatively poor penetration of the gun and very slow shell travel speed can become a problem. Avoiding direct encounters, and using flanking maneuvers is advisable.

The chosen model from Krupp, once finished, used a leaf-spring double-bogie system for its suspension, which was chosen instead of both a proposed interleaved suspension and the earlier devised torsion bar suspension system for the sake of faster production. The vehicle held five crew members, the commander, gunner, loader, radio operator (and hull machine gunner), and driver. Though it looked symmetrical, the Panzer IV turret was actually offset to the left of the chassis center line a bit while the engine was also offset to the right, this was to allow the torque shaft to turn the turret. The offset also meant that most of the ammo is held on the right side of the tank in storage areas. The Panzer IV was then accepted into service and production began in 1936.

After the Battle of Poland and France, the deficiencies of the Ausf. C variant saw it being upgraded on October 1940 to the Ausf. E. Despite the new upgrades, the Panzer IV was upgraded again to refine its detail with the Panzer IV Ausf. F in April 1941. Still retaining the KwK 37 L/24 75 mm howitzer gun, but with now a full 50 mm thick glacis plate and an increase of side armour to 30 mm. The tracks is also widened from 380 to 400 mm to balance the increased weight from the Ausf. C's 18 tons to the Ausf. F 22 tons.

The Ausf. F was the main Panzer IV variant during the start of Operation Barbarossa, but was soon found to be terribly outgunned by the appearance of the Soviet T-34 and KV-1 tanks. The short 75 mm howitzer was inadequate to deal with these new tanks at all. All was not lost though, as in the weeks before Barbarossa, a proposal was made to upgrade the Panzer IV with a new gun to increase its firepower, with the new 75 mm Pak 40 anti-tank gun. The resulting gun was the KwK 40 L/43 and upgunned the Panzer IV Ausf. F. The Ausf. F was then renamed to F1 for the variants retaining the shorter 75 mm howitzer, and Panzer IV Ausf. F2 for the variants with the more lethal 75 mm KwK 40 L/43 gun.

Skins and camouflages for the "Panzer IV F1" from live.warthunder.com.