Difference between revisions of "Pz.IV C" 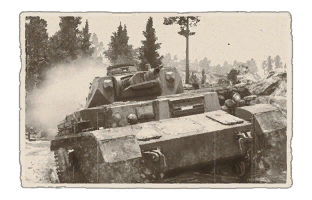 The Pz.Kpfw. IV Ausf. C (Panzer IV C) is a rank I German medium tank with a battle rating of 1.3 (AB/RB/SB). It was introduced during the Closed Beta Test for Ground Forces before Update 1.41. The Panzer IV Ausf. C is a fine tank in Rank I due to its high powered yet low-velocity cannon. It is often capable of annihilating an enemy vehicle with a single HE or HEAT shell, regardless of the angle of the enemy's armour. It has a fair amount of armour, however, due to the lack of an actual slope, it may seem considerably more fragile than some Soviet vehicles when facing AP shells. Against Rank I, it is often wiser to close in with the enemy vehicle, counting on the slower turret speed of the Soviet machines, allowing the player to circle around them with ease and deliver devastating shots. Bear in mind that while this tank can easily obliterate any vehicle at its own BR, against higher rank enemies the relatively poor penetration of the gun and very slow shell travel speed can become a problem. Avoiding direct encounters, and using flanking maneuvers is advisable.

Regarding gameplay, the "Panzer Kampfwagen IV Ausführung C" can be a difficult tank to use. The reason is that while armour and speed are comparable with other tanks of its rank, the gun clearly shows its roots as an infantry support weapon, not designed to fight other tanks. With its low muzzle velocity and low penetration values of basic ammunition, compared to 37 mm and 45 mm guns of the Ausf.C’s opposition. Like in the same tree with the Panzer 38(t), it offers similar armour and speed, too.d

However, with HEAT ammunition and a skilled player, the Ausf.C can be a great tank. HEAT ammo is difficult to aim due to its very low muzzle velocity, but its superb penetration, unmatched by anything in its rank, renders any enemy armour protection useless. Coupled with fast reload times, the Ausf.C can be a surprisingly effective frontline brawler, crippling or destroying enemy tanks regardless of their armour protection. In this role, it’s essential to dispatch the enemy before they can fire – the flat armour cannot protect the Panzer IV against anything at point-blank range.

If preferring a safer playstyle, it can lob HEAT shells from afar – this is difficult task to do, but as HEAT ammo does not lose penetration over distance, the Panzer IV C can destroy targets afar as well as up close and the armour may bounce a hit or two from longer distances. Engaging moving targets is however very challenging.

Despite its low penetration, it's actually not that bad. The statistics may indicate low penetration but remember. The Panzer IV C is at a battle rating of 1.3, it can penetrate actually pretty much everything it meets with normal AP shells. Also, the 75 mm has a very fast rate of fire. The gun size is also fantastic and there are frequent knock-outs with one shot. Don't worry about T-50s, T-126s, and other thicker-armored early French tanks, the gun can pen all of them with either round at its disposal.

1) Parts and Turret Drive: the tank is quite robust but some parts are very fragile;- turret can get jammed, and front mounted transmission can get hit.
2) Fire Extinguisher and HEAT: HEAT for use against more heavily armoured tanks. Fire extinguisher to improve the suitability, and/or to extinguish engine fires.
3) Other gun enhancing modifications: then the remaining modifications.

The Pz.Kpfw. IV's creation, like its predecessor the Pz.Kpfw. III, was devised by Heinz Guderian, where he envisioned a support tank to be used to handle anti-tank guns and fortifications. The Panzer IV was to work alongside the more numerable Panzer III in Panzer Divisions (three company of IIIs and one of IVs) to engage the enemy, giving the role of fighting enemy armoured forces to the Panzer IIIs. As a support tank, the tank was to have the short 75 mm howiter as its main armament and have a weight limit of 24 tons. MAN, Krupp, and Rheinmetall-Borsig worked on the development of the tanks, but the Krupp's model was selected for further testing.

The Pz.Kpfw.IV Ausf. C was the first Pz. IV variant to undergo relatively large-scale production. The tanks were produced from September 1938 to August 1939 in factories belonging to the company Krupp-Gruson. Beginning with the 40th tank to be produced, a Maybach HL 120TRM engine with 265 hp was used. This variant of tank had a specially reinforced stop under the gun barrel which reclined the radio antenna out of the way when the turret was rotated. The coaxial machine gun was fitted with an armored casing. This variant included a new 6-speed gearbox. The vehicle's speed was increased to 40 kph. Its forward armor was 16 mm thick. The tank commander received a new commander's cupola. Ausf. C tanks had a modified engine installation and an improved turret rotating ring. On Pz.Kpfw. IV Ausf. C vehicles, the radio operator did not have a directional machine gun but an observation slit and pistol porthole instead.

As a result of these improvements, the vehicle's reliability and ease of manufacturing were improved. 140 units were produced in all.

This variant of tank participated in every operation during the first part of World War II.

The Pz.Kpfw. IV Ausf. C's disadvantages became evident immediately after the attack on the USSR. The width of the tank tread did not provide adequate cross-country ability over soft terrain and snow-covered surfaces. The short-barreled 7,5 cm KwK 37 L/24 gun, with a muzzle velocity of 385 m/s for an armor-piercing projectile, was completely ineffective against heavily armored tanks like the British Matilda and the Soviet KV and T-34.