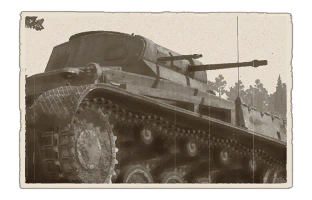 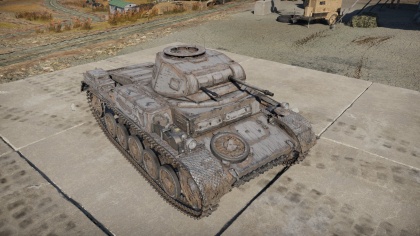 The Pz.Kpfw. II Ausf. F is a rank I German light tank with a battle rating of 1.7 (AB/RB/SB). It was introduced during the Closed Beta Test for Ground Forces before Update 1.41.

The Panzer II F is slightly less protected than the Panzer II C coming before it, with 30mm front plating on its turret & hull instead of the 35mm on its predecessor. It still has three crew, so it is easy to one-shot knock-out with most ammo types.

The chief difference between the Panzer II F and its predecessor is the main gun. The II F uses the 20 mm KwK 38, which has almost double the fire rate compared to the KwK 30. The magazine size did not change, still limited to ten rounds of ammunition. The reload time is also identical, so while it is tempting to "spray-n-pray", it is more practical to use it like you would an autoloading tank at higher ranks and administer trigger control to make the shots count. With the Panzer II F, you do not have to worry about changing ammunition performance with every shot, which makes the "autoloader-like" playstyle more attractive, unlike similar-BR Italian tanks using 20 mm autocannons, the AB41 and L6/40.

Just like its predecessor, this tank has one coaxial 7.92 mm MG 34. Due to slow turret traverse common to most lower-rank German tanks, this is not a very practical weapon.

This tank is similar to the Panzer II C, an average light tank for lower ranks with decent armor and decent mobility, but a potent cannon. It does not work well against sloped armor due to the weak normalization of APCR rounds. The higher rate of fire is quite punishing since it means that the typical player is continuously firing and reloading more often. If used like an autoloader tank from higher ranks, however, it becomes more accurate and effective. Do not get overconfident in this tank because your gun shoots fast and has excellent penetration; unfortunately, APCR post-penetration damage is lackluster here. Furthermore, the slightly higher battle rating of 1.3 means it can be pitted against the B1 ter, which it cannot reliably penetrate from the front or the side even when utilizing the APCR belt.

Furthermore, poor turret traverse means that a Stuart or BT can easily outmaneuver the tank. This relative difference is the same in both AB and RB/SB.

The product was a design based on the German Panzer I light tank, but it was larger with the addition of an extra bogie wheel and had a 20 mm autocannon as its main armament. The finished tank was designated the Panzer II, and production started in 1935 but did not start delivering tanks until 18 months later. At this time, it was in a low rate production status by 1936 in the Panzer II Ausf. C variant. In the 1940s, the Panzer II was upgraded to the Panzer II Ausf. F, which entered into production in 1941 with increased armor and a torsion bar suspension system. A total of 524 Ausf. F were produced between March 1941 to December 1942.

The Panzer II Ausf. F had a 35 mm front armor and 20 mm side armor compared to the 14 mm all-around armor on the Ausf. C. The 20 mm autocannon on the turret was the same, based off the 20 mm FlaK 30, then in use with a firing rate of 600 rpm from a 10-round magazine. The tank came with a coaxial machine gun as well. The turret was hand-cranked by the commander, who doubled as the gunner of the tanks. The crew of the Panzer II consists of three people, the driver, commander, and loader who doubled as a radio operator. The Panzer II Ausf. C could reach a speed of 33 mph with its torsion-bar suspension.

Despite the up-armoring in the different Panzer II variants, the Panzer II could still be penetrated by the most towed anti-tank weapon in service at the time, leaving the crew at risk to enemy fire. By 1942, it was largely removed from front lines, and production ceased by 1943. The turrets of these obsolete tanks were used as gun turrets on defensive bunkers on the Atlantic Wall, and the chassis stayed in use for other purposes, such as a self-propelled gun and tank destroyer in the Wespe and Marder II respectively.

The Pz.Kpfw. II Ausf. F was the last production variant of the Pz.Kpfw. II tank. Serial production of the vehicle was meant to answer a need for new tank formations, as medium tanks were produced in very insufficient quantities. The design of the tank was similar to the Pz.Kpfw. II Ausf. C, except for the bent forward portion of the hull, was made of 33 mm thick, with substantial armor plating. The thickness of the frontal part of the superstructure, turrets, and gun mantlet was increased to 30 mm. The armor thickness on the sides and stern was 15 mm. On the right side of the frontal portion of the tank's superstructure, a fake driver's viewport was installed. Also, the driver received a KFF-2 surveillance device, which allowed a viewing angle of 63° and was protected by a two-hinged lid. A container for the crew's things was affixed to the rear of the turret.

The main section of the Pz.Kpfw. II Ausf. F was equipped with a new 20 mm 2 cm KwK38 automatic cannon with a TZF 3a sight. In addition to improvements in its weapons' ballistic performance, in 1940, the tank received the pointed armor-piercing Pzgr 40 L'Spur shell, with an armor-piercing core made of solid tungsten carbide alloy. These measures significantly increased its armor penetration capabilities. The ammunition on the latest series of tanks was increased to 180 shells and 2,100 rounds. The turret was equipped with an improved rotation mechanism and a new design for the gun mantlets' armored viewports.

The tank was used extensively until the end of 1942. Self-propelled anti-aircraft guns, tank destroyers, and flame tanks were designed using this variant as a base.

Skins and camouflages for the "Panzer II F" from live.warthunder.com.