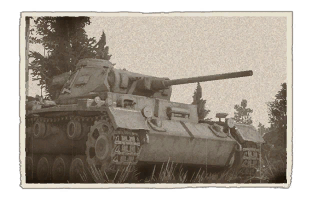 The Pz.Kpfw. III Ausf. J1 (Panzer III J1) is a Rank II German medium tank with a battle rating of 3.0 (AB/RB/SB). It was introduced in Update 1.43. An improvement over the J version with the longer 50 mm KwK 39 gun, the Panzer III J1 provides a better punch.

Most importantly, J1 variant is the first Panzer III to have the long barreled KwK 39 L/60 50mm tank gun. This gun offers 96mm of armour penetration at range of 100 m and 79mm at 500m. In practical sense, it is just enough to deal with most tanks at this BR, although targeting weakspots, or side/rear armour is often necessary. Heavy tanks like KV-1 are quite problematic, but that is why you have APCR ammunition. APCR comes in two set, PzGr40 and PzGr40/1. PzGr40 has the highest penetration - 150mm at close range, but loses penetration quite rapidly when shooting far targets. (->More info can be found below in the "Ammunition" section.)

Optimal combat distance for this vehicle is somewhere between medium to close range. But don't be mistaken, Panzer III J1 is not an frontline tank. You should be always on the move and harass the enemy without rest as any return fire will be lethal. Don't trust your armour and instead rely on your mobility. Flanking is the best option for J1 as you can use the high RoF for good effect and hopefully avoid the incoming retribution. You don't have the best mobility for medium tank, but you definitely remain competitive against most enemy tanks you may encounter. Always try to find some good firing positions, with available cover, and if necessary, pull back and relocate. Always avoid direct close range confrontations with main enemy force, never try to fight more than 1 enemy at the time. However - playing purely as support/sniper tank isn't optimal either, because of your lower armour penetration. First of all, lets talk about the gun. The 5 cm KwK 39 is a good gun in the right circumstances. Its main round, the PzGr 39 Armour Piercing Capped has average penetration for the BR, but causes little post penetration damage. Granted, if you fire it into a tightly packed turret, it will knock out the crew, but larger vehicles can be an issue. Then there is the PzGr 40 Armour Piercing Composite Rigid (APCR) round, which has high penetration (150mm!), but causes very little internal damage and performs poorly against sloped armour. It also loses its penetration quickly at range. It is best to carry both of these types of ammunition, allowing you to combat different targets more effectively.

Luckily, the KwK 39 has a saving grace. With a reload time of just under 5 seconds, it fires very quickly. This gun performs effectively in flanking maneuvers, where you can take advantage of weak side armour. Precise aim is necessary, as this gun rarely destroys a target in one shot. Normally you have a choice. Do you shoot the driver and immobilize the tank and then incapacitate the gunners? Or do you knock out the gunners first and then take out the driver? Most of the time, it is best to take out the gunners first, so that the tank cannot shoot back. However, if the tank is mobile and the turret is facing another direction, it is sometimes best to take out the driver first. This way the tank won't have a chance to find cover.

The armour of the Panzer III is poor. It is flat, and at 50 mm it won't protect you from even rank 1 guns. From the sides you are vulnerable to anything above a .50 cal machine gun. Avoid frontal engagements with M4 Shermans and T-34s. You are unlikely to be able to destroy them quickly, and often your rounds will ricochet off their sloped armour. Their rounds will slice through your armour like butter and often defeat your entire crew after a single penetration. Thus, this tank is best in a support/sniping role.

The Panzer III Ausf. J1 features a much better 50 mm gun compared to its predecessors, the 50 mm KwK 39, which is an improvement over the 50 mm KwK 38 by its longer barrel, giving a much better muzzle velocity to fired shell and therefore better penetration values. This new 50 mm gun gives the Panzer III a fighting edge against T-34s and M4 Shermans, which the older 50 mm KwK 38 had trouble fighting against. The Panzer III Ausf. J1 still featured the 50 mm armour thickness on the front and rear originally from the Ausf. J variant, but later models has new offset armour on the front of the hull and turret that are 20 mm effective. These armour also apply as spaced armour due to not being attached to the hull or turret mantlet. The spaced armour on the front helped defend the tank against Soviet anti-tank rounds or HEAT rounds fired at it on those plates, as it dissipates the penetration power before striking the hull.

The Panzer III J1 was only a stopgap design to integrate the 50 mm KwK 39 into service as fast as possible. The final designs in its later models were later redesignated the Panzer III Ausf. L.