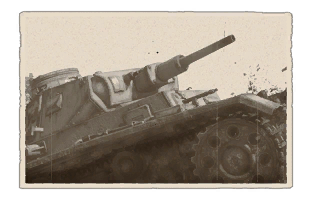 In game, Ausf. F modification differs from its predeccesor - Pz.III E mostly by its new 5 cm KwK 38 L/42 gun. While it doesn't offer that much more penetration than previous gun, and has a bit longer reload, it definitely causes more damage upon successful penetration. Other than that, only the turret armour has been enhanced a bit - most of the turret front armour is now 37mm thick (was 30mm). These changes makes the tank only slightly heavier, but the effect on mobility is negligible. 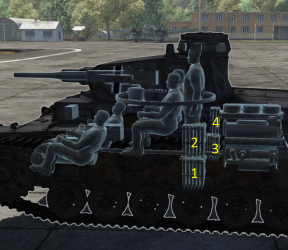 This tank should be played as a second line support or area denial vehicle, due to acceptable speed and accurate, potent gun, yet sluggish turret traverse even when fully upgraded. Avoid engagements at less than 500 meters, where the armour offers more protection against low-velocity guns and the 50 mm cannon retains its penetration well. Always try to use the terrain to the Panzer III's advantage, it has a very nice gun depression, so the Panzer III will have no problem with attacking over hills and various obstacles, while hiding the vulnerable hull.

The Panzer III Ausf. F was first prompted by the German army concerns of their tank-killing tank being undergunned during the French campaign, where the appearance of the French Char B1 and British Matilda tanks proved that their current arsenal was inadequate to counter these threats. Though it was initiated during the campaign, it was over before it could be fully implemented among the armoured forces. It wasn't until Operation Barbarossa, where the appearance of the Soviet T-34 and KV-1 tanks forced the Germans to take up better weapons for their anti-tank inventory. The solution was the 50 mm KwK 38, which helped the Panzer III be able to destroy these Soviet tanks with APCR rounds. Even though the newer Soviet tanks may put the Panzer III out of frontline duties, it still stayed as the more common Soviet T-26 and BT series light tanks were more easily destroyed by the Panzer III.