Difference between revisions of "Pz.III E" 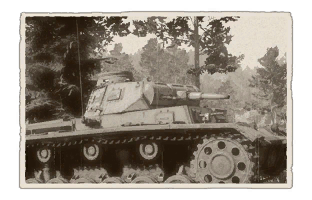 The crew of the Pz. III E is well-spaced out, enabling survival of a frontal pen or two by typical low tier cannons. Compared to the Pz.III B, the frontal armor protection is roughly doubled, to 30-35mm on the turret face and 30mm on the upper & lower front plates. The turret has some overlapping plates for up to 65mm of protection on some areas, sometimes saving you from otherwise guaranteed knockout. The sides are also 30mm thick while the rear is 20mm sloped, making it totally immune to tank-mounted .50cal machine guns.

Top speed improves significantly over the Pz. III B, at 71kph forward and 12kph reverse. Power/Weight is similar, 29.3hp/ton in AB & 15.38hp/ton for RB/SB. Maneuverability is similar to its predecessor.

The Pz. III E has the same main gun as its predecessor, the 37mm KwK36. Ammunition is the same - PzGr. APHE with 46mm pen and 13g explosive mass as stock, with 91mm pen PzGr.40 APCR as an unlock.

The Pz. III E still has the "average" flavor of its predecessor, but is able to rely on its armor a little more than before. However, the higher BR of 1.7 means it runs into much nastier opposition. The B1 ter at 2.3 is just about unpennable from any side even with the APCR shell, the Matilda Mk II at 2.7 is slightly easier to pen but has a gun strong enough to annihilate you at a mere glance. The M5A1 at 2.3 runs circles around you with a better gun than you.