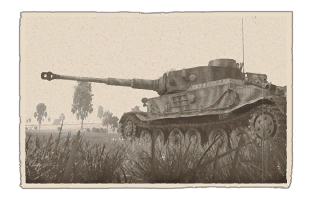 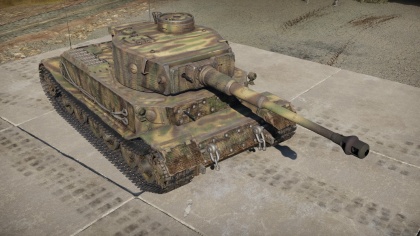 The Panzerbefehlswagen VI (P) is a premium Rank IV German heavy tank with a battle rating of 5.7. It was introduced in Update 1.45 "Steel Generals". The Pz.Bfw. VI (P) is an uparmoured variant of the VK 45.01 (P), with an extra 100 mm of armour bolted onto the front plate. It costs 6,090 Golden Eagles

Unlike the Henschel Tiger, and most other tanks, it is powered by a rather unusal combination of 2 Hybrid gasoline-electric engines. This brings some unusual handling characteristics to play. For example, because it is driven by the electric engine, it can go backwards just as fast as forward! So it has one of the highest reverse speed in the game now. On the other hand, its top speed in both directions is limited (only 31 kph, and it feels like it could go faster without the limit). It is also a little heavier than the Henschel, has narrower tracks, and its engine output is lower. Soft terrain isn't a friend of this vehicle.

The hull it uses is similiar to the Henschel, it has the same 102 mm of front armour, and 82 mm of side and rear armour, only with different shapes. However, additional 102mm armour plates are bolted to the front, making it a total of 204 mm of steel. (Same ammount of hull armour can be found on Ferdinand tank destroyer!) 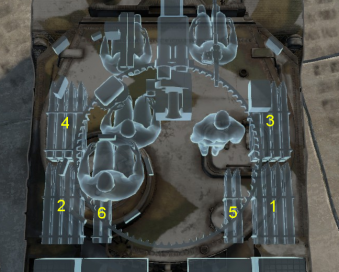 Gameplay is very similar to the Tiger E. Avoid direct close range confrontations (although the Porsche can hold its ground a lot better there), where its weakspots can be targeted, or be flanked easily, and rather use its excellent accurate gun to outshoot the opponents from afar, while using the terrain and various obstacles as cover (Hulldown maneuver). Refrain from angling the armour, as opposed to Box-shaped Henschel Tigers, because of the vulnerable front hull cheeks and much thinner side armour. 204 mm of front hull armour can defeat a lot of shells even completely unangled, and even more at high distance.

Lastly, remember that that the Pz.Bef.Wg.VI P BR is quite high, and it can meet opponents that are almost invulnerable to the 88 mm gun from the front (even when using APCR), and/or can still instantly destroy the Pz.Bfw.VI (P) with one well aimed shot.

The vehicle was displayed to Hitler on his birthday on April 20, 1942 alongside the Henschel version VK 45.01 (H). Unlike the Henschel variant, which had the turret mounted mid-hull, the Porsche version had the turret mounted far forward on the hull in order to make space for its rear engines and drive system. The tank was then evaluated by a technical commission headed by Albert Speer and it was found that the Henschel design was superior to the Porsche design as it was more mobile, more reliable, and easier to enter production. The Henschel version was accepted into service by the German Wehrmacht and was designated the Tiger I, while the Porsche variant was sidelined. Only five VK 45.01 (P) were produced before its rejection.

Before even the evaluations began, Porsche was so confident that their design would be chosen that one hundred chassis of the VK 45.01 (P) was already produced. With the Henschel version chosen, the chassis were no longer needed to be made into a tank format, but it would be a waste to simply scrap them. These chassis were converted into casemate structures that could mount the new 88 mm Pak 43 cannon, which was longer and more powerful than the KwK 36 on the Tiger I. This would be called the Ferdinand tank destroyer, later redesignated as the Elefant. Three VK 45.01 (P) was also converted into recovery vehicles designated the Bergepanzer Tiger(P).

Out of the five VK 45.01 (P) produced from its development to its rejection, only one saw service in World War II. The tank had the chassis number 150013 and was converted into a command tank, thus was designated the Panzerbefehlswagen VI (P). As a command tank, the tank would have much more radios than usual to allow for command communication between tank units and headquarters. Another feature on the Panzerbefehlswagen VI (P) was that an extra 100 mm of armour was welded onto the front hull armour, bringing the original 100 mm hull armour to 200 mm effective in thickness. The tank was used by Hauptmann Grillenberg in turret number 003 and the tank saw service on the Eastern Front with the Ferdinand units, serving in Tank Destroyer Battalion 653. It was deployed in April 1944, but was then lost in July of the same year.