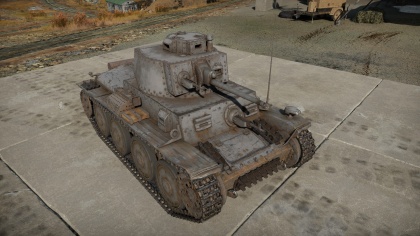 In 1935, ČKD (Českomoravská Kolben-Daněk), the tank manufacturer in Czechoslovakia wanted to find a replacement to the LT vz.35 (Also known as the Panzer 35(t) in German service). The reason was that the vz.35 was complex and had its faults that impeded its efficiency. Orders for new tanks would be coming from the gradually growing Czechoslovak army and other countries. They work jointly with Škoda Works in the development of this new tank.

The next tank design, designated in Czechoslovakia as the LT vz.38, fitted a conventional model for the interwar period. The armor was riveted with about 25 mm thick in the front hull and was not sloped. A new model was needed with a complete overhaul. The engine was placed in the rear of the tank, with a two-man turret in the center, and the driving compartment in the front with a front transmission. Perhaps the most significant distinction for this tank design was the use of a leaf-spring unit suspension consisting of four large wheels. The turret housed the 37 mm Skoda A7 armament, with about 90 rounds of ammunition stored in the vehicle. Unlike traditional designs, the coaxial machine gun is mounted on a ball mount, allowing it to be aimed independently on targets, yet could be fixed for coaxial usage. There is a second machine gun in front used by the assistant driver, who also doubled as the radio operator placed on the left of the driver, who was on the right side of the tank. The LT vz.38 was a very reliable design and other nations either ordered tanks (Peru) or purchased a license for production(Sweden.)

The LT vz.38 was successfully exported under the name "TNH." It was given to Iran, Peru, Switzerland, and Lithuania, all under different names, but done in small quantities (Iran bought the most at 50 units). The British Royal Armoured Corps ordered one trial model for an evaluation, but their data showed that the vehicle was uncomfortable for the crew. It was impossible to lay the gun when the tank is in motion; thus, the British did not order any and returned the trial model. Then in 1937, the Czechoslovak armed forces started a contest for a new tank to be put into service. Three companies, Škoda, ČKD, and Tatra, were involved and submitted their various designs with Škoda a variant of the LT vz.38, ČKD a prototype model different from the LT vz.38, and Tatra a very different design concept altogether. The army then chose the LT vz.38 model and ordered 150 units in July 1938, but these were never put to service in Czech usage when Germans occupied Czechoslovakia in March 1939.

When Germany took control of Czechoslovakia, they ordered the LT vz.38 production to continue as its firepower, armor, and mobility was considerably better than the Panzer I and Panzer II, which made up most of the German armored forces in 1939. At first, it was used under the designation LTM 38, but this was changed in January 1940 to the Panzerkampfwagen 38(t), or the Panzer 38(t) for short. The Panzer 38(t) was used as a substitute for the Panzer III due to the similarity in armor and armament. The 37 mm Skoda A7 cannon was renamed the 37mm KwK38 (t). The Germans would gradually upgrade the design in its production life and have seven different variants (A-G). The plates classified each option; one with 25 mm of frontal riveted armor originally, and the other with a total frontal armor thickness of 50 mm by bolting on another 25 mm of armor to the hull. Production under Germany control continued from 1939 to 1942, with a total of 1,414 tank units built (excluding export models and other vehicles built with the chassis).

A modified version of the Pz.38(t) light tank designed based on combat experience in Poland. The tank’s armor was enhanced to 50 mm in the front and 30 mm on the sides. Two similar versions of the Pz. 38(t) Ausf. E and Ausf F were released between November 1940 and October 1941. Five hundred twenty-five tanks were produced, including both versions.