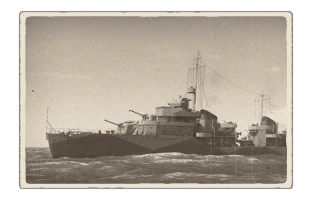 The Pr. 7U "Stroyny" carries four 130 mm B-13 single mountings, with two turrets ahead of the superstructure and two behind. The B-13 cannon is shared by most WWII-era destroyers of the Soviet fleet, and is a very potent weapon. However, the main flaw with this weapon is it’s absolutely horrid turret rotation speed of 4.2 degrees / second vertically and horizontally. This means that you have to turn the turrets very early to be able to engage effectively. The guns themselves shoot accurately and have a high initial velocity (870 m/s compared to 790 m/s for the American 5’’/38 guns). However, this comes at the expense of reload speed, as the manually-loaded weapons can only fire at 10 rounds per minute (RPM) with a spaded crew, compared to 22 RPM for the American 5’’/38. In fact, this fire rate is slower than everything except for the Japanese and Italian 5’’ guns, which have a similar fire rate.

The Pr. 7U "Stroyny" carries three 76 mm (3-inch) 34-K mountings in single mounts, all at the rear - one additional mount than it's tech-tree cousin, the Pr. 7U. The 34-K is also shared by most WWII-era Soviet ships, and gives you a potent secondary weapon that is of a relatively high calibre. This gun has a high fire rate of 27 rounds per minute (2.2-second reload), which can be decreased to 1.1 seconds with a full crew. The weapon itself is decent at closer ranges, but isn’t a particularly effective anti-aircraft weapon as it inherits the extremely weak Soviet traverse rate. The single mountings themselves are only capable of traversing at 10 degrees per second, marginally faster than guns of cruiser calibre (6 inch+) of other nations.

The Pr. 7U "Stroyny" actually has less anti-aircraft armament than the tech-tree Pr. 7U, but still more than enough to defend itself from any airborne threats.

The Stroyny also carries four 12.7 mm DShK guns in single mountings. The 12.7 mm DShK machine gun is a heavy machine gun, similar to the M2 Browning used by the Americans and the Vickers guns used by the British. This gun fires from a fixed 50-round magazine and will need to be reloaded after the magazine is expended. The gun itself is rather mediocre, and will struggle to hit targets reliably at ranges exceeding 1.5 km. As well, the weapon doesn’t do damage particularly well, considering that it is of a lower calibre. The Stroyny does not get access to any ammunition belt upgrades - the default one is the only belt available.

The Pr. 7U "Stroyny" gets access to six 53-38 torpedoes in two triple mounts with no reloads. The 53-38 torpedo is also found on most other Soviet WWII-era destroyers, and is relatively mediocre as far as torpedoes go. In terms of damage-dealing capabilities, the torpedo is decidedly mediocre, having more explosive filler (300 kg of TNT) than the American torpedoes but less than the British and Japanese ones. However, the main drawback of the torpedo is it’s range - without the “torpedo mode” modification, the 53-38s are restricted to a range of just 4 kilometres, meaning that they are tied for the shortest-range bluewater-ship mounted torpedoes along with the Italian destroyer torpedoes. The torpedo mode modification is necessary for hitting longer-ranged targets, but reduces the torpedo’s speed to just 56 km/h. In general, these torpedoes are a potent weapon against enemy bluewater ships, but lack the range to do significant damage without the “torpedo mode” modification.

The Pr. 7U "Stroyny" can bring two BB-1 large depth charges, but these weapons are almost entirely useless as you will never get close enough to the enemy to be able to use them. Thus, they essentially serve as extra explosive content on deck, and provide little extra armament in exchange for an increased chance of ammunition (depth charge) detonation. In general, it is not recommended to bring them.