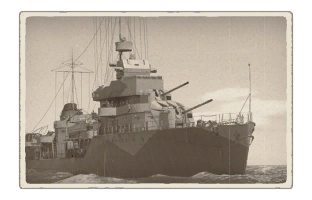 The captain of Pr. 7U will be familiar with this ship as it continues down the Soviet 130 mm road.. These naval cannons are standard cannon sizes found on other destroyers in the Soviet line-up. These cannons are quite capable at hitting the target and doing a considerable amount of damage.

Secondary armament found on this ship is a 76 mm cannon which can double as an anti-aircraft cannon which houses up to 300 rounds. Though a decent gun, it can hold its own against smaller boats or others which may be lacking in armour protection.

In comparison to the Moskva, this destroyer packs better anti-aircraft batteries which include a 37 mm cannon and several 12.7 mm machine guns. Between these three types, there are 13 guns which can barrage incoming aircraft or small boats in the area and rain down a hail of bullets.