Difference between revisions of "Pr.123K" 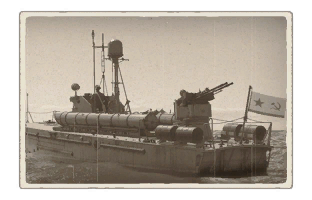 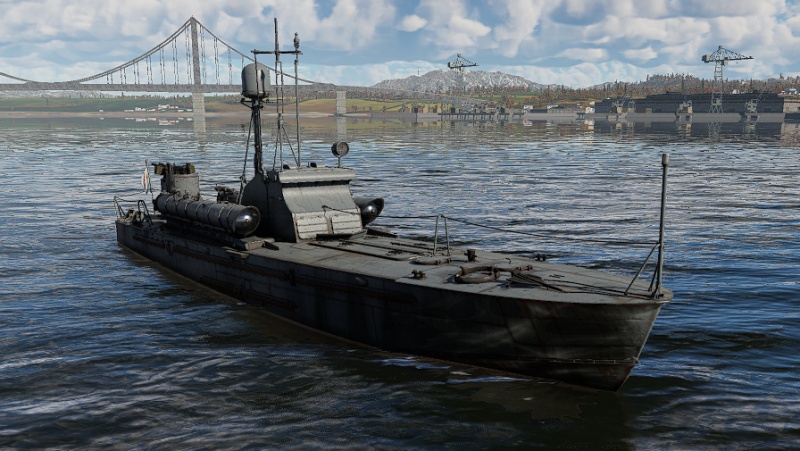 The Pr.123K "Komsomolets" is a rank III Soviet motor torpedo boat with a battle rating of 2.3 (AB/RB/SB). It was introduced during Update 1.79 "Project X" when the Soviet fleet was implemented into the game.

The Pr.123K, like the majority of PT boats, has no armour. As this is a boat of the same class as its predecessor in-game (Pr. 123bis), it has the same vulnerabilities - easily destroyed engines and frequent fires.

The Pr. 123K "Komsomolets" has excellent mobility that is very comparable to the reserve G-5 torpedo boat. This ship has an excellent top speed of 120+ km/h in AB, as well as great acceleration and snappy rudder response. These factors combine with the Pr. 123K's small silhouette to make the ship almost impossible to hit at longer ranges - this plays as its biggest advantage which leads to a sort of "hit and run" playstyle. If you have mastered the playstyle of the G-5 reserve torpedo boat, you will master the Pr.123 easily.

The Pr. 123K is equipped with 2 x 450 mm wet-heating 45-36NU torpedoes, which are placed on the sides of the boat. When released, they are fired forwards already at speed, which allows you to get a jump on any opponents who are in the torpedo range. It is a good idea to rush tougher opponents and fire your torpedoes very close to them to guarantee a hit (use this tactic at higher battle ratings to get rid of the toughest ships).

The Pr. 123K can seem as a downgrade from the previous Pr. 123bis, with two less machine guns placed in a position that forces you to expose your side to shoot. However, the ship does have a more powerful set of guns, which can be combined with the ship's excellent mobility to make use of ambush / hit-and-run tactics.

Pr. 123K “Komsomolets” was the last variant of the Pr. 123 series of motor torpedo boats built by the Soviet navy during and shortly after the Second World War. The ship differed from previous Pr. 123 versions due to the removal of one 12.7 mm DShK machine gun turret, the installation of a heavier 14.5 mm machine gun turret, and the installation of two Identification Friend-or-Foe (IFF) and target search radars. As well, the ship carried a new design of smoke generator designed to operate for longer periods of time. In total, 205 boats were built from 1949 to 1951.

The Pr. 123K was the final development of the Pr. 123 class, and had improved armament and sensor equipment. Compared to the previous Pr. 123bis, several changes were made to the basic ship design. The Pr. 123K was built with a new, more spacious open bridge, which housed the steering and control equipment. As well, the Pr. 123K lost the forward machine gun turret of the Pr. 123bis, while the rear turret was upgraded to a dual KPV machine gun turret. The ship had less powerful engines compared to the Pr. 123bis (200 less hp per engine), but was capable of a higher top speed thanks to a lighter and more hydrodynamic hull . Finally, the ship gained two new radars - the “Zarnitsa” air-search radar and the “Fakel-M” IFF device. Both were mounted on a dome behind the bridge.

In total, 205 Pr. 123K boats were built between 1949 and 1951, several years after their earlier counterparts. Of these, some ships were delivered without the radar installation. Two ships were modified with single and dual hydrofoils (being the A-10 and A-11 models), which were capable of even higher speeds in tests. As well, over 100 Pr. 123K MTBs were exported to Warsaw-pact countries. The ships had a long service life, some ships remaining in export service until 1990.