Difference between revisions of "Phantom FGR.2" 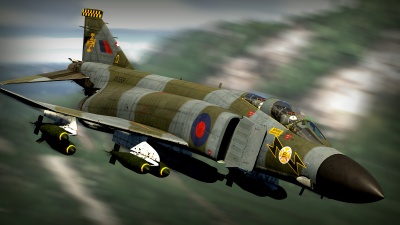 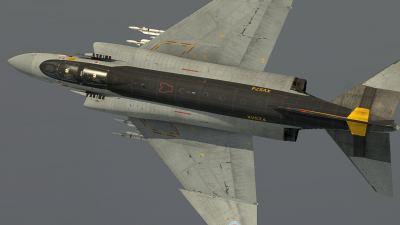 Like the F-4C the Phantom FGR.2 lacks any internal guns; instead relying on an M61 Vulcan rotary cannon, mounted centrally under the fuselage. The cannon is angled downwards at about 1°, coupled with the position of the gun under aircraft this makes aiming slightly more difficult than on other aircraft; the gun also has a wide bullet spread. A benefit of the rotary cannon is that it can fire all 1,200 rounds of ammo before it can overheat and jam. Unlike the F-4C the Phantom FGR.2 can only carry a single gunpod.

In terms of other suspended weaponry, the Phantom FGR.2 falls far behind the F-4C, having 6 loadout options compared to the F-4C's 21. It has a more limited choice of bombs, carries fewer rockets and cannot carry Bullpup air to ground missiles.

In terms of air to air missiles the Phantom FGR.2 can carry four AIM-9D Sidewinder missiles; as opposed to the F-4C's choice of AIM-9B and AIM-9E Sidewinders. The AIM-9D is very similar to the AIM-9E in some ways outperforms it; the AIM-9D can pull 16 G instead of 10 G and is faster, with a more powerful rocket motor. The AIM-9E, however, can be slaved to the Phantom's radar unlike the AIM-9D and may track better.

The order in which modifications are unlocked on the Phantom FGR.2 will depend to some extent on how one would like to play the aircraft. The AIM-9D missiles are among the best available to top tier jets, and so most fans of missile combat will likely want to unlock them as soon as possible. If missiles are not desired then it may be wise to instead focus on unlocking the 20 mm belts and new 20 mm cannon modification, to make the spread of the gun less extreme and more usable; and if one plans to use it as a ground attacker, then the ordnance options are the obvious choice (although the FGR.2 does not excel in this role to the same extent as its American counterpart). When equipped with its 8 x 1,000 lb bombs the FGR.2 becomes highly potent bomber; using its low altitude performance to get to enemy bases incredibly quickly, it is possible to unlock the bombs and use this tactic to speed up unlocking other modifications, although the FGR.2 is a capable fighter when stock so this is not a necessity.

Possible modules to prioritise (depending on play-style of the pilot) 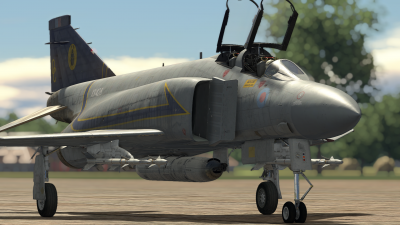