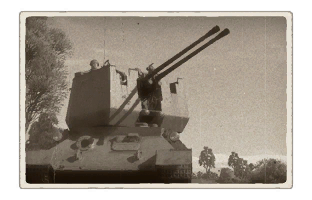 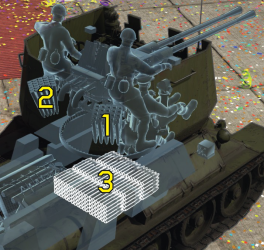 This SPAA is equipped with four fast-firing 20mm autocannon, allowing it to fire dense barrage of shells in a matter of seconds. This means that the Wirbelwind can quickly knock out all 4 crew in the Phòng không T-34's turret, making it defenseless. Plus the Wirbelwind has a more stable chassis that wobbles less in a brake, meaning that in a sudden encounter the Wirbelwind is more likely to stable its guns and fire first. Therefore, if you know a Wirbelwind is somewhere near, be very alert and try to spot it before it spots you. Aim at the turret to disable its gunner first. Note: your firing speed depends on the distance, as the Phòng không T-34 shakes violently when firing. So if you are face to face with the enemy, fire continuously. If it is more than 200m away, only fire in short bursts or even single shots to avoid missing due to the shake. Wait the guns to stabilise before firing the next salvo.