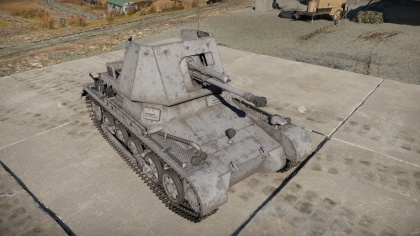 Although virtually unarmoured, it can be used in a head-on manner. However, this is not recommended. It is much better to snipe or ambush the enemy. Its gun may have a good Rate of Fire, but many other guns of its rank, such as the British 2 pounder, will reload faster than you. Your gun is extremely powerful for its rank, which means you will go through almost anything, so there is no need to throw yourself in front of the enemy.

While the gun can be sufficient and one-shot many enemies from light to medium tanks, more heavily armoured tanks will be a problem unless using the APCR ammunition. The common enemies to be concerned about are the B1 bis, B1 ter, and Matilda Mk II if the Panzerjaeger I is used as the highest-BR option in your lineup. The B1 bis is only frontally penetratable on the turret ring or the exposed breech of the hull-mounted 75mm. The B1 ter is only penetratable in flank shots with APCR or a very lucky turret ring hit. The Matilda is only frontally penetratable on the turret ring or demands use of APCR.