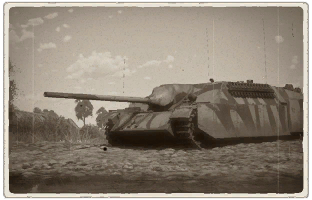 Befitting of the German casemate destroyer line, the frontal armour on the Panzer IV/70 is one to be feared. It features a mighty frontal plate of 80 mm sloped at 50°, resulting in an awesome 120 mm of protection. The gun mantlet also is very well protected, and has over 150 mm in some areas. The amazing armour is made better when the player unlocks the "add-on armour" modification, applying tracks to the front and sides of the tank, and results in over 185 mm of protection in some areas. Even with this amazing armour, it is best to use the IV/70 at longer ranges, as this allows you to make use of your amazing gun and turns you from a difficult target to a nigh impenetrable one.

However, the side armour is very weak and is able to be penetrated by most things at your BR, so the player should take care to look out for flankers.

Being based on the chassis of the Panzer IV, the all-round mobility is very solid. The tank is able to reach 43 km/h (27 mph) and hold itself there over most terrains and has very good hull traverse, allowing for quick turns.

The tank has a MG 42 commander machine gun with a high fire rate and decent traverse.

The Panzer IV/70(V) is not meant to be used to rush the enemy, instead its function is to be an ambush sniper tank. Experience gained from operating the Hetzer can be applied with the IV/70.

Note that hills and down-sloping roads intersecting the battlefield are great ambushing spots to set up and wait for unsuspecting enemy vehicles.