Difference between revisions of "Panther "Dauphiné""

The Panther "Dauphiné" is a premium rank IV French medium tank with a battle rating of 5.7 (AB/RB/SB). It was introduced in Update 1.91 "Night Vision". It is a French-captured example of the Panther A found in the German tree with a few cosmetic differences like missing side skirts and new french markings. 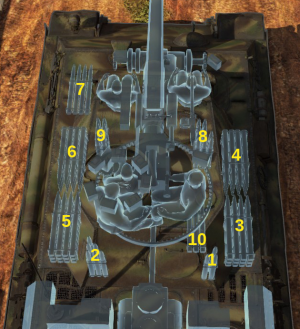 Ammo racks of the Panther G.

Another thing to note: the only difference between this and the German Panther A is the lack of side skirts and the markings on the tank. This is useful in Simulator battles because if you were to put German markings over the French ones you may just pass as a German tank. Take that as you will and warn the people on your team not to shoot you.

The Panther "Dauphiné" was part of a large french program of rehabilitations of Panzers left by the Wermacht after D-Day. This program was led by the Captain Besnier who suceeded to form a little tank brigade of almost 20 old panzers: mostly Panzer IVs but also 2 Panthers and even 2 Tigers. The "Commando Besnier" fought during the encirclement of Saint-Nazaire, the last city still under german control on the 11 of May 1945 and then took part in the French Occupation of Germany at the end of the war. Some of the tanks have been attributed to the 3rd Armored Division at the end of 1945 and were kept mobilized for some months before being replaced. Some of the models have been given to museum (the Tiger can be seen in the museum of Saumur in France).

Nicknames after french regions have been given to every Besnier's tanks: Tiger "Colmar", Tiger "Bretagne", Panther "Dauphiné"...

File:10184.jpg
Besnier and some of his men with the Panther "Dauphiné"