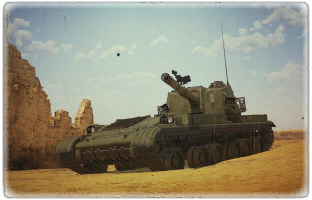 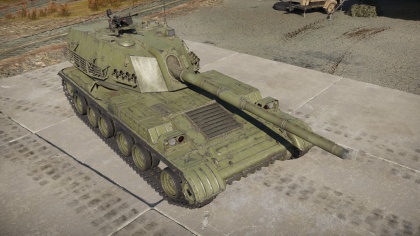 The PTZ89 is a purpose-built tank destroyer armed with a formidable 120 mm smoothbore gun, somewhat similar in layout and concept to the infamous Soviet Object 120. It is remarkable for having entered service in 1989; by then, the era of the main battle tank was well underway and gun-armed tank destroyers were out of fashion. This conundrum exists in War Thunder as well, where the PTZ89 faces agile and well-armed tanks like the Leopard A1A1 while not being speedy or well-protected itself. Still, if the PTZ89 does one thing well, it's firepower. The marvellous cannon easily penetrates almost anything it meets and the assisted loader allows several targets to be destroyed in quick succession. This vehicle is all about its gun and a skilled gunner can make good use of it for sniping and ambushes.

The PTZ89 is built on the chassis of the Type 83 self-propelled howitzer and its overall protection is disappointing. The hull has enough armour to shrug off heavy machine guns from the front but the sides are only 15 mm thick. The large and bulbous turret is even more vulnerable, the sloped turret face only being 22 mm thick. Never trust the armour of the PTZ89, vehicles armed with autocannons will easily shred it and it can be gunned down by the ubiquitous M2 Browning from the sides. Any aircraft equipped with cannons or heavy machine guns can destroy it from above.

The thin armour ironically makes subcaliber rounds produce less spalling upon penetrating the tank, but the internal layout can still lead to fatal results. The three crew members are lined up on the left side of the tank (right side from an attacker's perspective) and well-aimed shots might knock all of them out, putting the vehicle out of commission. That said, the turret seating is rather high and there is a chance that a shot knocking out the driver might pass underneath the turret crew. The turret bustle also houses many rounds of ammunition without blowout racks and penetrating shots to the turret front or rear can set them off.

Following this, the gun was put in a turret on the Type 321 utility tracked chassis that would be used on other vehicles such as the PHZ-89 or PGZ-09. The vehicle would be demonstrated in 1985 in Nankou, Beijing, with more tests being conducted until late 1988, when it finally began initial production. It first entered service in 1989, and by the time it was retired, around 100 had been produced. Having served its purpose and the rise of new Chinese MBTs such as the ZTZ99 (Which have capable guns), It retired in November, 2015, when the 39th Army Group held an official retirement ceremony for the vehicle.