Otherwise known as the PT-76E, the PT-76-57 possesses many significant upgrades, including night vision and a two-plane stabiliser. The main difference is the armament, a rapid firing AU-220 57 mm cannon fitted in a unique turret which, using the same BR-281 shells used in the ZSU-57-2, proves very effective when dealing with numerous enemies at once. Compared to the ZSU-57-2 due to the similar armament, the PT-76-57 makes up having only half the firepower by instead having a significantly faster rate of fire. On a relatively mobile and low-profile chassis, the PT-76-57 can be a true menace on the battlefield when flanking otherwise heavily-armoured foes or tearing through lightly-armoured IFVs and light tanks.

Overall, armour is extremely weak. You cannot rely on the armour to save you in any circumstance, as almost everything in the BR bracket can penetrate you at any angle, and at any range. The turret face averages around 35 mm of armour, the upper and lower glasis averages between 23 mm and 45 mm, and the sides are extremely weak, at only 13 mm of armour. The frontal armour and the angles will only protect you from heavy machine guns. Even light machine guns can penetrte your vehicle from the side, so if you disable an enemy's main gun, be sure to avoid showing your vulnerable sides to enemy machine gun fire.

The AU-220 cannon is extremely effective in the BR bracket, as it can destroy any light tank at ranges up to 2.5 km, most medium tanks up to 2 km, and can reliably destroy heavies using weak spot sniping from 1.5 km. In CQB, the cannon is devastating, and the 20 g of TNT filler in the round ensure catastrophic damage from a successful penetration. The cannon performs best in CQB, or at ranges of less than ~1 km. At long range, use your laser rangefinder and pinpoint weak spots, or aim for the vulnerable sides. Some things to consider remain, though, like the relatively low muzzle velocity of the round, the low penetration at ranges beyond 2 km, and the fact that you cannot reliably destroy heavies frontally. Unlike most tanks, it thrives best in an uptier, where you face early MBTs with poor armour. Plus, the cramped crew compartments of these MBTs allow for consistent single-shot knock-outs from the sides. 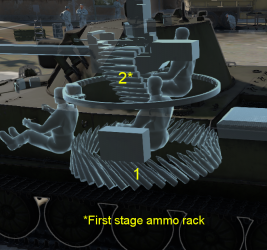 The PT-76-57 performs extremely well in the support role, or as a flanker type of vehicle. In smaller maps, try to avoid face-to-face confrontations with heavy tanks, as it will quickly get your vehicle destroyed. Instead, try to secure a good position near a cap point, or flank to a side route to surprise passing tanks. As a support tank, stick with friendly tanks, scouting and helping to repair as needed. Disable tanks for allies to finish when you can't, and destroy more lightly armoured targets. This tank performs exceptionally well as a flanker as well, as it is fairly mobile and can easily take out tanks from the sides. If a more aggressive playstyle suits you better, rush a capture point, find a secure position, and destroy enemies pushing into it.

In the early 2000’s, the issue of increasing the combat effectiveness of the numerous, but outdated PT-76’s was proposed to be solved in a very non-trivial way. Engineers of the Nizhny Novgorod design bureau "Burevestnik" combined the 57mm automatic gun developed in the USSR at the end of the 70’s with a mechanized ammunition rack, combining this in a combat module for a specially created turret for light tanks of the PT-76 series. While considering possible ways to re-equip old amphibious tanks with a new weapon, the small-caliber automatic cannon, although it was inferior to other variants of larger calibers in terms of armour penetration, gained a lot in terms of the burst weight to time ratio, as well as in possible applications - from destroying armoured vehicles (including a modern MBT when hit to the side) to fighting helicopters.

The AU-220 module itself, built on the basis of the Soviet S-60 anti-aircraft gun, has already been proposed for the fleet in the form of a remotely controlled shipborne mounting. For use on armoured vehicles, the module was equipped with a modern fire control system with night vision devices and a laser rangefinder. The prototype PT-76 with a 57mm gun, remained at a stage as a working prototype, however, the AU-220M module continues to exist as a promising solution for the latest vehicles in the Russian army.