Difference between revisions of "PBJ-1H" 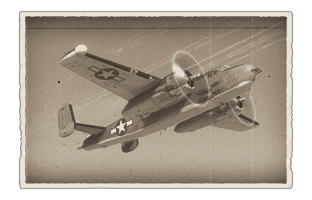 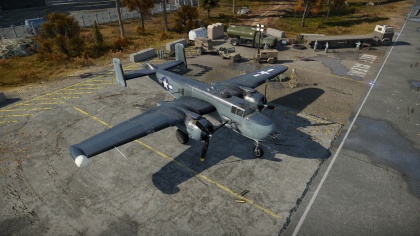 The PBJ-1H is U.S. Navy variant of the B-25 which was operated by the U.S. Marine Corps as a ground attacker. This aircraft is a powerful ground strafing machine and due to the weapons package built-in, it can be viewed as a gunship. With eight 12.7 mm machine guns and a 75 mm cannon, most light ground targets such as AAA positions and Artillery positions can be destroyed. The 75 mm T13E1 cannon is similar to the 75 mm M3 on the Sherman tank and shares its powerful support capability. With Armored Targets belt loaded, it can knock out light pillboxes with ease and greater accuracy than bombs in Realistic and Simulator modes. It is even effective against light and medium tanks, although the low fire rate makes it less than ideal for strafing several targets in a short target window. It is recommended to use the virtual cockpit view to aim the main gun. The 12.7 mm guns should be mainly utilized against "soft" targets such as Armored Cars, AAA and Artillery positions, and the 75 mm Gun against hardened targets such as light pillboxes and tanks. That said, the concentrated MG fire can also be used to destroy light pillboxes (with practice), though will require significant ammo usage to do so.

Despite armament differences, the airframe of the PBJ is still that of the B-25. While this means that it will have a relatively large number of defensive weapons, it also means that it is relatively sluggish compared to other close-support aircraft. It also presents a relatively large and slow-moving, though semi-well-defended target. Beware all variants of the Bell P-39 Airacobra, P-63 Kingcobra, P-47 Thunderbolt, all variants of the Me 410s and the Yak-9T; these aircraft can destroy your aircraft without much difficulty, whereas you will have a difficult time expending numerous 12.7 mm rounds trying to knock them out of the sky or off your tail.

Rugged, sturdy, though, the PBJ-1H is all of those things. Featuring crew armour protection that outclasses the B-17 Flying Fortress in a handier, smaller design, the PBJ-1 is a though nut to crack and even harder to devoid of crew. Calibres above 20 mm are a must for a quick kill, otherwise the PBJ-1H will repay in kind. For going all defence is good, but all offence, too? It is called overkill, of the pursuit fighter.

The two Wright R-2600 air-cooled radial engines are themself hard to destroy and with dropped payload the PBJ will just keep flying on a single damaged one. Denying underarmed fighters the ability to lethally cripple it. Yet this aurcraft has got one downside: Fuel tanks. While present in all planes, the armour, crew and bomb bay take up all the fuselage. Leaving only space in the wings. A common cause of crash is hence a fire and thus a structural failure of the wingspar.

The PBJ-1H can be outfitted with the following ordinance: