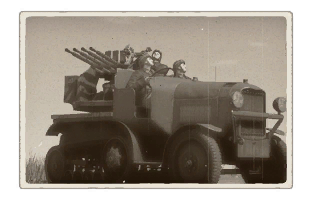 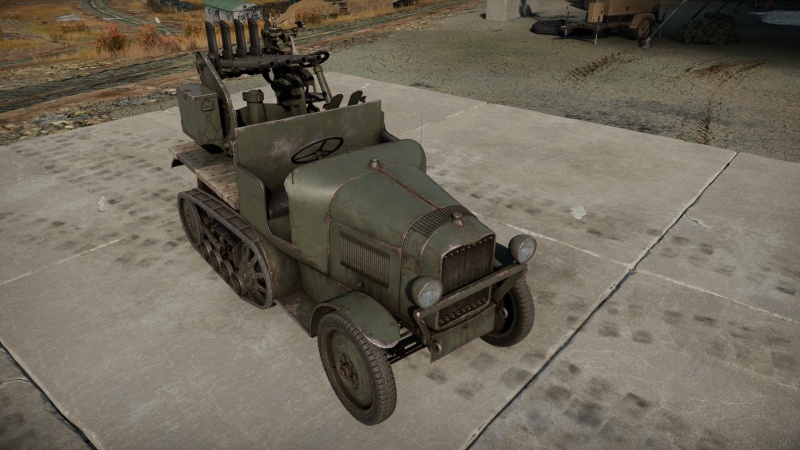 The Citroen Kegresse P.7.T is a rank I French self-propelled anti-aircraft vehicle with a battle rating of 1.3 (AB/RB/SB). It was introduced in Update 1.75 "La Résistance". With its four 13.2 mm Hotchkiss Mle 1930 machine guns, it poses a certain threat to enemy aircraft while featuring poor mobility (off-road) and armour.

The P.7.T AA is a very classic interwar anti-air defence system with its guns mounted on a mobile but vulnerable chassis.

With only 3 exposed crew members, anything can damage, disable or destroy this vehicle. Its armour does not provide enough cover to the crew from any angle. Even .30 cals guns can easily destroy this vehicle, so be sure to stay out of sight from enemies.

The half-track configuration usually provides increased off-road mobility to wheeled vehicles while enabling to carry more weight over the tracked section, a rule to which the P.7.T AA is no exception: It can reliably move itself across any rough terrain. The only downside to this vehicle is its low HP, which makes hill climbing quite slow. This little engine also struggles to bring this much weight to its max speed: One should go downhill and hit the gas in order to reach 40 km/h. Turning on the spot is also a no-go since the tracks do not provide enough traction to the ground: Hit the forward key and gain some speed before attempting any manoeuvre. Be patient and choose your path wisely and you should reach your destination soon enough.

With its four HMGs, this SPAA is quite reminiscent of the GAZ-AAA (4M) while having much more firepower. Since these weapons fire simultaneously, one hit usually means four holes in your opponent, a heavy toll to the early planes (and biplanes) you will be shooting at this BR.

The P.7.T AA has practically no armour. Every crew member sits exposed to enemy fire, so even a light machine gun can knock out the entire crew in a matter of seconds. This means that the P.7.T AA should never be exposed to any enemy fire, including artillery barrages, enemy ground fire and more difficultly strafing attacks from aircraft. The only parts of the vehicle that might stop a rifle-calibre round are the engine block and the gun mount.

The mobility is above average and smooth overall, while no terrain poses a challenge due to the half-track system. Due to the relatively high potential speed, the P.7.T AA can quickly get into an advantageous position on the map to shoot down planes. Just be sure to keep an eye out for flanking light tanks or fast medium tanks such as the Panzer III and IV, as anything can annihilate you with mere MG fire.

The quad 13.2 mm Hotchkiss HMG's are fantastic at shredding planes and start fires very easily due to the belts containing pure API rounds. With their above-average fire rate, high damage, good accuracy and decent reload speed, they are an AA jockey's dream. It is worth noting that they have a limited magazine capacity, only 30 rounds per gun, but this is more-or-less remedied by the fact that there are 4 guns, allowing for 120 rounds total.

However, due to the P.7's low BR, they can be decent at destroying reserve and 1.3 tanks from the sides and rear. It is not recommended to use it in this fashion, as you leave yourself as an easy target for anything with guns. 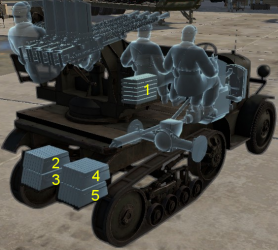 Playing the P.7.T by focusing on air targets is the most viable strategy. Do not spawn this vehicle early game since there will be few planes to shoot at. Do not engage aircraft too early, as you will only expose yourself. Begin firing at less than 1 km range for the best effect. Always watch out for multiple aircraft, as if they strafe you, you will almost certainly die. The guns are surprisingly potent, and will quickly dispatch most air targets after a few hits, although some heavy fighters and bombers may prove challenging to destroy. When engaging enemy tanks, you can reverse from behind a building to only expose the gunner to enemy fire.

The first half-tracks were built by Frenchman Adolphe Kegresse for Russia in 1910-11. After the First World War Kegresse returned to France to work with Citroen to produce half-tracks for the French Army starting in the 1920s. By 1940, these unarmoured Kegresse-Citroen half-tracks (the P.17, P.19, P.107, and MCG variants) were used primarily for towing artillery, although a small number of closed-top half-track armoured cars (the P.16) were also in service. The P.7.T had been an earlier Kegresse model, built between 1925 and 1927. The French, who had created the first self-propelled anti-aircraft gun-truck back in 1913, would continue through the interwar period experimenting with various truck-mounted AA weapons like those shown in this model.