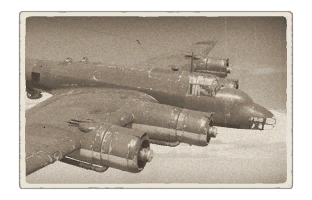 The Piaggio P.108B Serie 2 is a typical heavy bomber. It should always avoid enemy fighter aircraft if possible, the Piaggio P.108B Serie 2 is a massive plane and it does not like taking hits especially in the wings where the plane carries its massive fuel load. If an enemy plane is going to attack you, do not go head-on as you have no gunners or any guns at all at the front of the plane. Always give them your tail so your gunners can shoot at them.

The P.108B Serie 2 is a heavy bomber with a heavy bomb load and relatively weak defensive armament. When delivering the bombs to the targets, high altitudes are a must. The preferred targets of this bomber are stationary objects like pillboxes or slow moving vehicles such as ships (if you can time it well) and of course the bomb targets and airfields. Should an enemy fighter catch up with you, it is certain doom as your defensive guns have a low chance to kill it. To survive attacks, use your gunners to ward off the enemy aircraft until help comes. Stay away from combat as much as you can and do your job as a bomber.

The P.108B Serie 2 maybe a striking plane visually but it does come with combat limitations. The Aircraft is slow and poorly armed. You will need to plan a course around the map to try and avoid enemy fighters as much as possible. Keeping your altitude high and turns to a minimum will help your survivability. It is always helpful to have a fighter or two fly escort as well.

The P.108B serie 2 can be outfitted with the following ordinance: