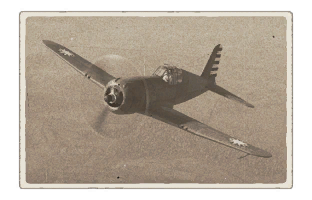 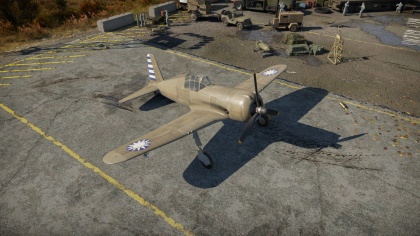 Most flight characteristics of the P-66 are average or perhaps slightly below average. The top speed is not terrible for its rank, but it will not be winning many races against contemporary German and Italian aircraft with sleek inline engines. It is slower than the Bf 109Es, and C.202s or He 100s will leave it in the dust. The Japanese Ki-43-II is faster as well. The climb rate and acceleration are nothing special. Turning is decent when combat flaps are used, but it is less maneuverable than many low-rank aircraft it faces. Horizontal energy retention is alright, but the vertical energy retention is below average. Dive characteristics are fairly good, as it picks up speed nicely and the controls do not stiffen that much.

Compared to the CW-21, the P-66 has two more 7.62 mm machine guns and slightly more ammunition for the twin M2 Brownings. The former are located in the wings, and the latter are tightly clustered in the upper nose. The M2 Brownings are the star of the show as they are highly accurate and have access to mid-war belts; the Universal belt has a good proportion of M8 API-T rounds that are quite deadly against low-rank aircraft. The low-caliber machine guns are less useful since they experience issues with convergence and become ineffective past a few hundred meters. Still, they add extra burst mass and will do a number against unarmored aircraft.

At the start of a match, climb and gain some altitude, at least a few thousand meters. Sideclimbing is recommended to avoid getting jumped by high-flying opponents early on. Do not try to climb to great heights since this would take a while and the engine will not perform very well there. Keep an eye out on the battlefield and look for enemies. If things are quiet, the P-66 can serve admirably for attacking bombers and attackers due to its good protection and firepower. If enemy fighters are nearby, stick with teammates and look for an opening to engage. For newer pilots, it is easier to go after enemies that have a significant energy disadvantage or are distracted. Be careful when picking fights and avoid extended horizontal or vertical maneuvers. If the engagement becomes unfavorable, consider acting as bait and leading opponents towards teammates.