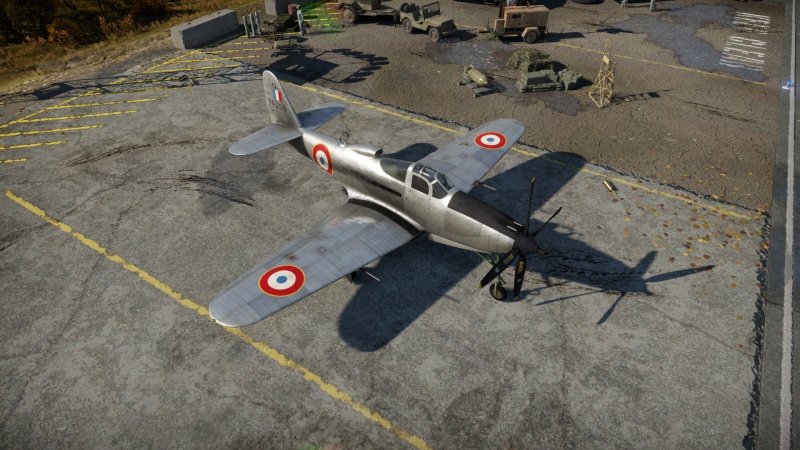 The aircraft is a high altitude interceptor/ energy fighter, with its turn radius slightly better than before. The quick dive speed and high energy retention allows the player, with the correct altitude, to engage opponents below numerous times using the high yo-yo method. This aircraft should not be used for ground attacking due to its average ammo count.

The P-63C-5 is a superb energy fighter, especially at low to mid altitudes, with very respectable turn performance. Its extremely high top speed and climb rate at low altitudes, along with good turn performance, allow it to out-energy most opponents, especially if care is taken to lure them into high-speed fights, where most opponents will lose their energy much more quickly than the P-63.

While better at altitude than the P-39 from which the P-63 it was developed, this aircraft loses much of its performance edge relative to its main competitor, the BF-109F, along with many other air superiority fighters at around 3000-4000m. If you find yourself in a dogfight at altitude with such an aircraft, try to lure them to a lower altitude where you can better leverage your performance advantages. If the situation allows, a shallow dive is often a good technique, as it takes advantage of the airframe's low drag to neutralize any performance deficit relative to most opponents. A steep dive can be useful in a pinch, but allows the canny enemy to retain a defined altitude advantage while staying above you.

The M2s are strong machine-guns with a relatively long range. While effective out past 500m, especially against relatively slow targets, care should be taken when firing relative to many other M2-carrying fighters due to the relatively low number of rounds per gun. Remember that you out-speed most opponents you will see, so burning ammo to spook fleeing opponents isn't always necessary.

The 37 mm M10 cannon is ridiculously powerful, but not horribly accurate and gains dispersion quickly when burst firing. Aim carefully when firing, and prioritize its use on stalling fighters or larger opponents such as attackers or bombers. A single shot to a wing or fuselage of an enemy plane is often all that it takes to bring it down. Try to wait until you are within a few hundred meters to fire, even at what would be a dead easy shot for a gun or cannon with better velocity and accuracy. Never fire more than a few shots of 37mm at a time to minimize dispersion and ensure the cannon does not jam.

Head-on attacks are a mixed bag in the P-63. While the Brownings are strong in a head-on due to their high general damage and good accuracy, the P-63 is generally fragile and extremely prone to fires on the wing fuel tanks, which will immediately neutralize you as a threat even if you survive the fire due to massively increased drag and degraded turn performance. The best way to approach head-ons in this fighter is to dodge using your strong roll to stay off-axis relative to your opponent and use your strong performance and turn characteristics to gain the upper hand in the subsequent fight. If confident in your aim, try firing a short burst at around 800m from your opponent before dodging. With their high velocity, a well-aimed burst from the Brownings can take a naive opponent by surprise, and will often cause critical damage to their plane. The 37mm is not generally useful in a properly-executed head-on, as its poor accuracy makes it unlikely to land a hit if you break off to dodge at a safe point. Save the ammo for when you've drained your opponent of their energy and have a clear shot.

While the P-63 excels as an energy fighter, if you find yourself in the position to boom-and-zoom, it is extremely good at doing so. Its high top speed and strong climb enable you to maintain the decisive energy/altitude advantage that defines boom-and-zooming. The P-63's main disadvantage in a high-speed boom maneuver is relatively strong elevator control stiffening at speed, which can make lining up a shot difficult. Remember that against most enemies, as long as you are pushing them down in altitude, it is easy to maintain an energy advantage in this plane, so transitioning from a high energy differential with extremely long boom-and-zoom yo-yos to a lower energy differential with tighter loops can be advantageous, as it puts the opponent under more pressure as they have less time to prepare between each of your approaches.

The P-63 can make effective bomber hunter as a typical bomber makes an easy shot, even with the 37mm. Ensure you set up your runs effectively, as the P-63's fragility means a well-placed burst from the bomber's turrets can easily take you out of the fight. It's often inadvisable to pursue bombers at altitude due to the P-63's relatively poor performance above 4000m. A canny bomber pilot that is above or even at the same altitude as you will simply turn away and rake you with their defensive armament. However, if you find yourself above a bomber, the P-63's speed can enable safe, high-speed runs that will often net easy kills due to the P-63's strong armament.