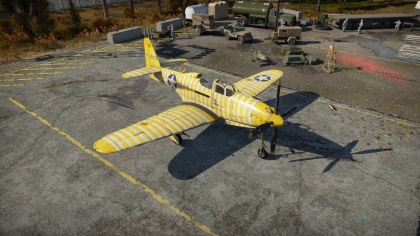 This aircraft is an improved version of the previous Kingcobra carrying the same armament and main gun. The aircraft is still a high altitude interceptor/ Energy fighter, with it's turn radius slightly better than before. The quick dive speed and high energy retention allows the player, with the correct altitude, to engage opponents below numerous times using the high yo-yo method. This aircraft should not be used for ground attacking due to it's average ammo count.

Unfortunately, the C-5 is relatively superior to its predecessors. It has far more cannon ammo , and a slightly lower climb rate than the A-10. However, this is relatively trivial as both planes are generally evenly matched. Keep this in mind, though, when selecting your load out of planes.