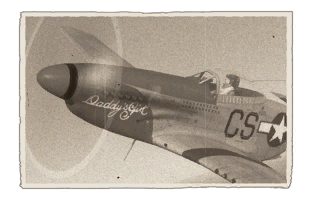 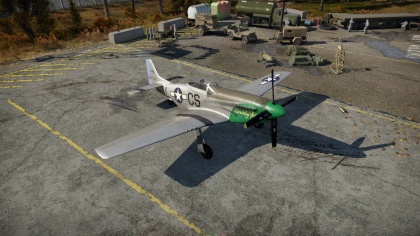 The P-51 is best flown as boom & zoom fighter and bomber interceptor. It's impressive speed and armament can give experienced players quite the advantage over enemy fighters. The aircraft also performs surprisingly well in the rolls of an attacker/light bomber.

The P-51D-10 can be outfitted with the following ordinance:

Probably the best asset P-51D has is its speed and its ability to achieve it and maintain it. Like with all planes, higher attitude should be achieved. Although its climb rate is nice, there are enough planes with better and therefor pilots of P-51D should plan ahead and not wait for the last second to climb. Best way to climb at start is to climb towards corner of map, so enemy will be encountered later, when P-51D is already high enough. When enemy is spotted, heading in other direction than P-51D, P-51D can enter mild dive and go for strafe run. After that, it is important to continue heading in the same direction, so speed is maintained. Even the most agile fighters won't be able to turn quickly enough to fire just one shot at you. If feeling confident or sure about kill, P-51D should get at least 2+km away from enemy and then start to turn towards him, depending on its speed. If speed is under 500 kph, bigger distance should be achieved before attempting turn. This ensures that turn will be completed before enemy gets to 1 km distance, so you won't give your enemy opportunity for the first shot. However, head on assault should be done only against weaker opponents, since 50 cal does not have the punch of 20 mm or 30 mm that same tiered planes carry. Salvo of 50 cal rounds from tracer belt can easily and often does ignite enemy engines upon impact, but few hits from 30 mm will tear wings of P-51D, while fire can be taken out. When engaging enemy bombers, aim for their engines. When engine catches on fire, focus on another engine until it also burns and so on. It is likely that fire will be taken out, but damage done by 2 to 4 burning engines will be so severe that enemy bomber will either crash within next minute even without one more hit or he will lose altitude so much that it will be an easy target for lower flying teammates. Bigger bombers like B-17 should not be followed for more than few seconds, as engine of P-51D is too fragile and often will turn red upon first few hits, which gives you about 1 to 2 minutes before its engine dies completely. It is especially important to engage B-17 from relative higher altitude, gain little more speed and aim for engines. Well aimed burst of tracer belt rounds should be enough to ignite 1 or 2 engines during this. Keep in mind that B-17 can fly even with just one single engine and maintain its altitude and speed. Do not attempt to cut off wings of bomber like with bigger guns, as it is quite hard to do so with 50 cal. When engaging bomber with huge glass cockpit like on He 111, front assault with salvo of 50 cal rounds has high chance to kill its pilot with the amount of rounds that will be fired.

It may seem that agility of P-51D is lacking at first sight, but it is not that bad when used correctly. P-51D has good turn rate at higher speeds and its pilots should try to keep well above 400 kph. When at a speed around 500 kph, even Spitfires will have troubles getting behind you. However, P-51D should avoid these encounters as this will bleed its speed to the point that P-51D will be no longer able to turn with enemy. If window of opportunity arises, for example when opponent starts his turn into wrong direction after attempting to out manoeuvre P-51D, P-51D can enter mild dive and go for run. P-51D can get to its top speed quite fast, especially when in mild dive. Top speed of P-51D is one of the best on its tier. These three speed factors will help you run away from many opponents, giving you a chance to set your own rules of engagement with them. When running away with enemy closing in, try to avoid climb at all. If climb is desired, it is best to wait until it is safe. If climb can not wait, try to climb below 10 degrees. When enemy with much higher speed is catching up with you at higher attitude, mild dive may not get you fast enough to your top speed. In these situations deep dive can be done. During this, enemy will get even closer to P-51D. As top speed of P-51D is quite high, after enemy loses his initial speed advantage, P-51D will probably already start to get away. After this deep dive runaway, start to climb around 10 degrees. P-51D is good at maintaining its speed, so it is likely that while P-51D will continue to move around 800-850 kph after deep dive for couple of seconds, many opponents will quickly slow down to their listed top speed. This should be enough to provide safe escape. If running away is not an option, high speed turn fight can be done for a short while. P-51D shouldn't prolong these encounters and should as soon as possible try to get away as already described in turn fights. When enemy is going head on, he should be avoided. As already said, 50 cal can not match 20 mm and bigger guns head on. Additionally, such encounter will probably damage engine, which will at start take away the most important asset of P-51D and after few minutes will lead to its failure. Vitality of pilot is average, so he may survive and so is durability of its wings. However, control surfaces of P-51D are quite fragile. Head on should be done only with weaker opponent, who has either much weaker armament or is already critically damaged. If engine turns red, airfield should be sought as fast as possible. With red engine try to climb as much as possible in a way that speed will be at least slowly increasing. When engine dies, glide towards airfield in a way little to none speed is lost to avoid stall. If speed reaches 200 kph and dive is not possible if airfield is to be reached, use flaps as they will keep you in air for little longer even at lower speed. If combat flaps are not enough and even then P-51D starts to stall, raise flaps, open gear, use landing flaps and retract gear. Landing flaps will keep you in air for even longer than combat flaps, but if they are deployed too soon, they will serve as air brake, which is not desired during glide.

In April of 1940 the British Purchasing Commission visited the United Sates in the hope of securing a new fighter to supplement their Spitfire and Hurricane. They approached the North American Aircraft Company with the proposal to build P-40s under license from Curtiss. Instead, North American proposed the idea of building a brand new superior fighter. The BPC accepted the proposal and the first prototype was set to be completed within 120 days. The design team was led by Lee Atwood, Raymond Rice, and Edgar Schmued (a German-born Austrian who was previously employed by Fokker). They quickly set to work on the new prototype designated NA-73X. The original prototype was assembled in 117 days and first flew on October 26, 1940. A majority of the early Mustangs produced were primarily used for testing by the USAAC. Shortly thereafter 320 NA-73s were ordered by the BPC. The first production model destined for the RAF made its maiden flight on May 1, 1941. The Lend-Lease contract was approved later that year on September 25th. These aircraft were designated Mustang I.

The P-51D was powered by a Packard Merlin V-1650-7 engine. The aircraft was fitted with six 12.7 mm Machine guns, a reflex gun sight, and a bubble canopy. A total of 7.956 D variant Mustangs were built.

Ray S. Wetmore (September 30, 1923 – February 14, 1951) was a U.S. Air Force ace of World War II. He joined the U.S Air Force in 1941 at the age of 18 and was assigned to the 359th fighter group. He achieved his first 4 victories in the sky while flying a P-47 Thunderbolt before making the switch to a P-51D-10 named 'Daddy's Girl.' He was later shot down during the battle of the Bulge but survived, finishing the war with a documented 21 German aircraft destroyed. He died in 1951 while flying a F-86 Sabre that he suddenly lost control of during an approach to an airfield.