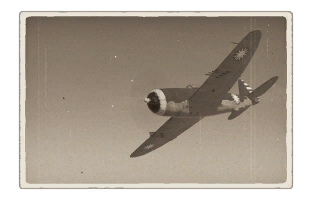 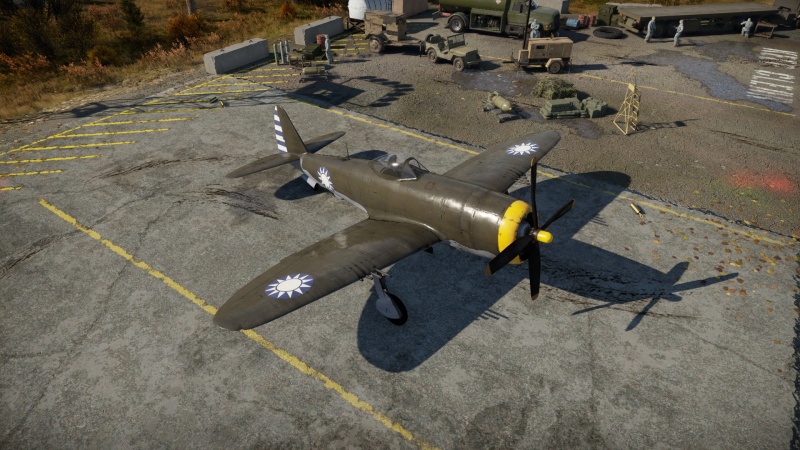 The P-47D-30 (China) can be outfitted with the following ordnance:

Always maintain speed. The P-47 handles like a dream at about 550-650 km/h (350-400 mph), but once it gets below 350 km/h (220 mph) it handles sluggishly, like a pig dipped in mud. One great thing about the handling at high speed though, is that the P-47 responds quickly at high speeds, and this allows some impressive defensive scissoring without losing wings at terminal velocity. The high-wing loading is an issue though, as the Jug will lose most of its energy in a blackout turn. This does endow the Jug with one key feature. it is a rock-solid gun platform.

Unfortunately, zoom-climbing and dive acceleration are not the "Jug's" forte. The Bf 109 has a superior dive acceleration, and the Fw 190 can zoom-climb far faster. Still, the energy retention of the P-47 is great, along with the fact that it flies far faster than both the Würger and Messerschmitt. The P-47 is not a turnfighter. Although it is possible to out-turn a heavy fighter like the Bf 110 C or Do 217, it is not recommended - the acceleration is mediocre, and once a P-47 is a sitting duck, it will be swarmed like flies to fruit in a compost pile. Acrobatic pilots will not be impressed by the P-47 as well, because it performs Immelmanns very sluggishly and the roll rate is not magnificent as well.

Durability, as mentioned above, is pretty good. As in World War II itself, the P-47 was renowned for its rugged construction. In War Thunder, the biggest weak points of the P-47 are its engine and wings. The wings can break fairly easily in manoeuvres at speeds around ~675 km/h or so. They also tend to break after a well-placed cannon burst (from planes like the Fw 190, A6M2/3). The engine though is also fairly susceptible to catching fire while chasing a bomber, but this is not due to its durability but to its size. Speaking of fire, the P-47D will be heavily damaged by the time it pulls itself out of a fire. One should immediately try to limp home if set aflame.

The performance of the P-47 at altitude is very good, but once you go above about 9,000 m (~30,000 ft), its critical altitude, any energy lost will have to be regained by diving and losing altitude. Even though the D-28 now gets 70 seconds boost (which is significantly more than the D-25), it still will have some troubles accelerating and climbing. Keep in mind that this boost is only achieved on WEP, although on military power it still has 65" of boost.

Turnfighting should never be the combat tactic in a P-47. The immense engine power, decent wing-loading, and good flaps of the D-30 variant can allow it to turn surprisingly well against some of its opposition, namely German, American, and Soviet props with poor power-to-weight ratios at high speeds (typically in a dive). This can be used to keep track of an opponent trying to evade your fire but do not enter a prolonged dogfight or you'll lose too much energy.

When used skillfully, the tracer rounds can be used to scare the opponent as due to the high calibre (for a machine gun) and rate of fire, tracers from the .50 cal machine guns can be absolutely terrifying to anyone attacked by them. However, besides to the scare effect and low takedown capabilities, the tracers have limited practical use.

You want to be more careful when hunting bombers, since with the Sim control (whether it be mouse joystick or a real stick) the plane will manoeuvre much more gently, making itself a great target for the bomber's gunners. DO NOT follow behind a bomber's 6 unless you are sure that its tail gunners are unconscious. Chasing behind a bomber makes yourself pretty much stationary for the tail gunners, and you will be showered with bullets. The big radial engine of the P-47 will usually get damaged. Instead, before launching an attack, get an altitude advantage over the bomber by flying around 2 km above it. The bomber should only fill up about 1/6 of your gunsight. The best position for an attack is at the bomber's high 6 so you can adjust the lead much easier. Dive at the bomber, but not directly at it, try to predict where you two will crash by imagining yourself as a missile, that's where you should aim at (deflection shooting). To maximise the damage it is better to aim for their wings and engines, as the fuselage usually soaks up quite some bullets. Only fire when the bomber passes in front of your guns. This short window might seems inadequate to do anything, but the 8 x MGs on the P-47 are actually quite destructive, as sometimes it only takes one bullet to set the target aflame.

Turnfighter: for dedicated turn fighters such as A6M5 and Spitfire, the key is patience. If you are at a higher altitude than the P-47, follow above and/or behind it so it cannot get far away for a climbing session. Then, although you are a turn fighter, perform Boom and Zoom (BnZ) on it, but watch out for your speed as a turn fighter may rip a wing apart or have their control surfaces compressed when diving at high speed. The P-47 cannot really pull any agile defensive manoeuvre due to its weight. If it enters a steep dive in an attempt to get away from your attack, do not follow. The P-47D can accelerate up to ~800 km/h while still being responsive, a speed turn fighters cannot even dream of. Gradually decrease your altitude when the Jug gets out of the dive, then BnZ it again. If the P-47 is higher than you and BnZ you, patience comes into play. Roll and turn under its negative G area to force its shots to miss. If it does not zoom away and instead tries to pull off more shots, use your superior turn rate and get on its tail. If it does zoom away, be prepared for a few more passes. As you dodge, turn towards your teammates as they might be able to help. If your plane performs great at low altitude (eg. La-5), lure it closer and closer to the deck with each dodge.

Strike aircraft/bomber: the bad news is, unless your aircraft is extremely robust, well-armed or fast (eg. BV 238 or Ju 288), there is not much you can do to counter a diving P-47D. Its 8x .50 cals will easily rip your plane apart, and some Jug pilots may open fire from very far away, for example when they are still 900 m away. Their 12.7 mm bullets inflict damage really well even over distance and thus can seriously incapacitate a target regardless of distance. If a P-47 somehow is staying on your tail, do not hesitate to put an accurate burst into its huge radial engine. With engine/cooling systems damaged, most pilots will choose to bank away.

Thunderbolt pilots flew into battle with the roar of a 2,000-horsepower radial engine and the flash of eight .50 calibre machine guns. This combination of a robust, reliable engine and heavy armament made the P-47 a feared ground-attack aircraft. U.S. Army Air Forces commanders considered it one of the three premier American fighters, along with the P-51 Mustang and P-38 Lightning. The United States built more P-47s than any other fighter airplane.