Difference between revisions of "P-47D-22 RE" 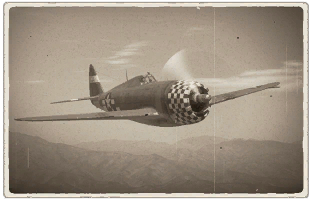 The P-47D-22 RE can be outfitted with the following ordnance:

In air Simulator mode, the P-47D-22 RE does not feel as struggling as in RB since simulator is more about situational awareness rather than who climbs the highest in 2 minutes. Its sufficient speed, robust airframe, punching .50 cals and multiple additional options of bombs make it an excellent multi-role aircraft. However, comparing to the later Jugs with all-clear bubble canopy, the razorback P-47 has worse visibility. The front have quite some frames around the gunsight, but they are thin which is a good news. The sides are overall unaffected. The rear view, however, is greatly obstructed by the razorback, preventing the pilot from seeing what's on the tail which can be fatal sometimes. The early P-47 has the same heay weight and large size but the engine is not as powerful as the later models, so it will feel more sluggish at lower speeds.

Due to the rather inadequate climb rate of the P-47D-22 RE, it may be a good option to hunt down low-altitude ground pounders rather than climbing to a bomber's altitude, especially if your airfield is close to the frontline leaving you little room or time to climb. Wander around friendly ground units like tank/truck columns, AAA/howitzer positions and bunkers, they are very likely to attract enemy ground pounders. Remain at an altitude of ~1200 m until you see a target. You can start diving at it straight away, or if you can get the timing correctly, dive right when the ground pounder finishes a pass and is climbing up for the next pass, this is when it is the slowest and most unresponsive. Also because of the positions (prey is almost perpendicular in front of the attacker) the target's large cross section of the entire top will be presented to the guns. For a diving P-47, that is pretty much setting oneself up as an easy, large and motionless target. Lead carefully and put a solid burst into it, usually it will get crippled if not destroyed straight away.

As for dogfighting, because almost all aerial battles in Sim occurs at below 3,000 m, the P-47 can easily climb to this altitude and gather up quite some speed before engaging a battle. The tactic is similar to everyday RB tactics, that is to utilise your speed, powerful guns, and altitude if you have any. If, unfortunately, you find yourself being chased at your 6 and you don't know how to do any defensive manoeuvres, do a large, smooth turn towards the nearest friendly airfield to avoid bleeding too much speed. Then shallow-dive towards your airfield. The P-47 can quite easily outrun opponents like the A6M or Bf-109 E, but struggles to outrun Bf-109 F/G, FW-190 A or another P-47. Another way of disengaging is to do a sudden split-S to dodge under the chaser. Average Sim players will now try and see where you went, if not immediately losing track of you. You can then run for your airfield or shallow climb for another attack. In the heat of an intense fight, do not pull too much/too sudden, the P-47 may enter flat spins. Pull gently, around ~80% to the stick's limit is generally enough.