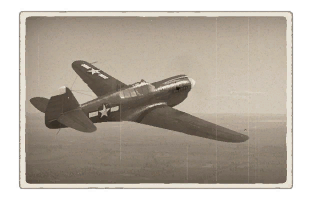 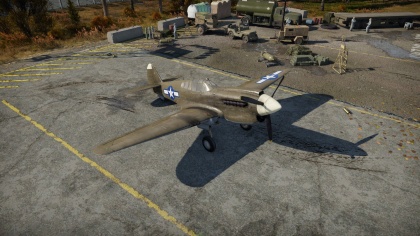 The P-40E-1 with its six .50 calibre machine guns are much like a precursor to the P-47 with its eight .50 calibre machine guns. While not as devastating as a 20 mm autocannon, the six machine guns when connecting with a target will do a considerable amount of damage, to the point of causing a critical hit if not blowing off a wing or severing a fuselage. Unlike aircraft with nose-mounted weapons, the wing-mounted guns require the pilot to set a convergence point. Typically a convergence point set around 250 - 300 m (or even closer if you typically fly on the enemy's tail) will be enough to thoroughly dismantle an enemy airplane. Though the guns can be pushed to fire at aircraft which are further away, however, they start losing their punch and chances of critically damaging the enemy starts dropping. Due to the issue of convergence, head-on attacks are discouraged unless the pilot is proficient at cantering the aircraft slightly so that one set of guns fires in a straight path towards the head-on attacker.

As an early version of a multi-role aircraft, the P-40E-1 can be configured as a fighter/interceptor or a fighter/bomber. Bombs can be outfitted to the P-40E-1 to allow for strategic bombing and low altitudes, many times during a diving run. Less effective at bombing bases, this fighter can lob the bombs to pick off smaller and lighter targets which may be spread across the map and once the bombs are released, it can resume its fighter role. The disadvantage of carrying bombs on this aircraft come with reduced manoeuvrability. The roll rate of this aircraft dramatically changes when carrying the two 100 lb bombs under the wings, however, the single 500 lb bomb though heavier, with its being mounted on the fuselage hardpoint it doesn't affect the roll rate as much.

Compared to other planes at the 2.3 battle rating, the P-40 is fairly well-armed. The 6 x M2 machine guns can rip apart most enemy aircraft. A well-trained burst can take any fighter, however, some attackers (namely the well-armoured IL-2) and larger bombers might take a little bit more patience and a few more passes. Ammo capacity is also very good and will easily last an entire RB match, given that the pilot has good accuracy and trigger control.

Against the Bf 109:
Turn flight- the BF-109 is typically a superior aircraft in terms of climb rate and vertical manoeuvres. However, early/mid-rank 109s can be turned against in the Warhawk, especially at higher speeds.

The next attempt at design was a simpler one. Berlin recognized the U.S. Army believed they only needed a fighter effective to only 15,000 ft. The aircraft's engine was replaced with a simpler supercharged Allison engine and was designated XP-40. The new prototype first flew on October 14, 1938. The aircraft flew and looked good but various adjustments were quickly made. These included moving the radiator and a more powerful version of the Allison V-1710. The XP-40 was quickly recognized for its good handling and dive speeds.

When the P-40 reached the D and E variants many changes had to be made. Allison redesigned its V-1710 and the aircraft's fuselage when need to accommodate the higher thrust and additional horsepower from the new engine. Curtiss removed all armament from the nose of the aircraft and placed four 12.7 mm Browning M2 machine guns in the wing. In the later E model that number would be increased to six. The P-40 was also fitted with an improved cockpit enclosure, larger windshield, and a better canopy. The P-40E-1 was also capable of carrying six small bombs under the wings. In late production models, a small dorsal fin was added near the base of the tail for added stability.

The P-40 was inferior to some German single-engine fighters in high-altitude combat due to its lack of a two-stage supercharger. This caused the P-40 to be rarely used in operation in Northwest Europe. But between the years of 1941 and 1944, the P-40 played a critical role in the theatres North Africa, the Southwest Pacific, and China. It also had a considerable role in the Middle East, Southeast Asia, Eastern Europe, Alaska, and Italy. The P-40's bad high-altitude performance did not matter in these theatres, where it was used as an air superiority fighter, bomber escort, and a fighter-bomber. Although the design was considered mediocre in postwar, suitable for only close air support, Allied pilots reported the P-40 flew surprisingly well as an air superiority fighter. The P-40 also had the advantage of low-cost assembly, which kept it in production as a ground-attack aircraft long after it was considered obsolete as a fighter. A survey conducted in 2008 showed that at the time, 29 P-40's were airworthy.

Allied forces have used this American single-engine fighter all over the world: in Europe, Africa, Asia and the Pacific theater. P-40E-1 'Kittyhawk' modification of that plane, made for the British Air Force, was equipped with an Allison V-1710-39 engine and armed with six 12.7 mm. Browning machine guns. The plane could optionally carry 500 pounds of bombs under its fuselage and 100 pounds of bombs on each wing. There were more than 1,500 P-40E-1s produced. 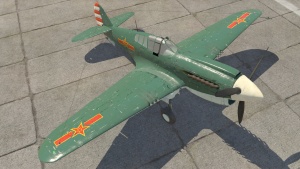 P-40E-1 in People's Republic of China Air Force Camouflage. Found and Extracted in the files using the War Thunder CDK