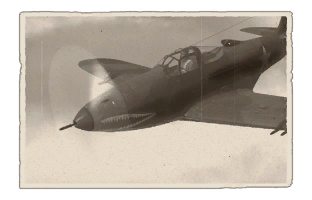 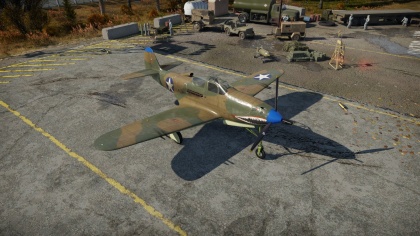 The P-400 is the "little brother" of the P-39's and P-63's. Reaching maximum speed at 2,400 m (7,900 ft) means you will have to look for enemies below you, or sacrifice speed to meet the opposition higher up. At medium & low altitudes it can be considered quite a fast plane for its BR range. It handles turning at higher speed rather well but can become quite unstable at lower speeds. Watch out when engaging in stall fighting, hammerheads & yo-yos. The P-400 can survive at high speeds while diving, yet will suffer from compression. The plane is suitable for high speeds attacks where you work with more with horizontal than vertical movements. Keep your speed up!

The P-400 has good weapons consisting of one 20 mm cannon with 60 rounds and two .50 cals and four .30 cals. If you have a good aim, you can kill enemies in seconds, but if you don't the limited cannon ammo will run out in about 10-15 seconds. The .50 calibre will still destroy foes reasonably quickly, though the .30cals require the right amount of consistency and concentrated fire.

Try using energy tactics at low altitude and Boom & Zoom to dispatch targets if you are at high altitude. In Domination matches, this plane comes into its environment with dogfight furballs occurring in which the P-400 can intervene. Use the excellent energy retention to your advantage and avoid any type of turn fighting, as even a F6F Hellcat would be able to out-turn your aircraft.

Never try to contest bomber altitude when you have it stock - it just lacks the engine power to compete above 4,000 meters, and even as a spaded aircraft, it still doesn't perform as well as the Spitfires and Bf 109s at similar battle ratings. If you're ever forced to dogfight, use the rudder and elevator to pull yourself into a sort of climbing spiral, which the P-400 is exceptionally good at thanks to its powerful engine.

The Hispano cannon once on target will easily take out fighters and most bombers with even a short burst, or at the very least, cripple it. However, if there is any good fighter pilot on the enemy team, they will climb and try to secure high altitude. When you see them in more agile aircraft, your only option is to dive away and begin to strafe the furball down low. Beware that many planes in this battle rating range, including the Cannon Ishak, outperform this plane in at least one, if not more categories, but this plane usually has more than one advantage over every plane it will face (i.e. it is faster than the Spitfire Mk 1a and out rolls it).

Use the advantages of this plane - its high speed, great rudder, powerful engine, superior armament, and terrific initial turn at high speeds. However, don't use it in a way that exposes its weaknesses - bad low-speed handling, weak turning, and poor climb rate - in combat, like when you are getting Rope-a-Doped, just flip over with an Immelmann and Turn & Burn.

A single-engine all-metal monoplane fighter with a closed cockpit and retractable tricycle landing gear with a nose leg. The aircraft had an unusual layout, with the engine placed behind the cockpit.

The aircraft was designed by the Bell Aircraft design office under the direction of R. Woods and H. Poyer. The experimental model XP-39 took its maiden flight on 6 April 1938.

The first overseas order came from France in October 1939. The French were in urgent need of rearming their fighter forces, and bought as many fighters as they could from overseas. However, the order was not fulfilled before France's capitulation in the summer of 1940. After the capitulation, all outstanding French orders for military vehicles were redirected to Britain.

The high flight characteristics of the experimental XP-39 also drew attention from the British buying committee in the USA. Seduced by its tricycle undercarriage, powerful armament, high climbing rate and promises of high speeds of up to 640 km/h, the British ordered 675 airplanes, including the 200 from the French order.

The fighters produced for Britain had the designation model 14A and were powered by the 12-cylinder air-cooled Allison V-1710-E4 engine with a maximum output of 1,150 hp.

In the RAF, the model 14A fighters received the designation Airacobra Mk.I. However, when the British received the first Airacobra Mk.Is in the summer of 1941, tests revealed that rather than the high-altitude interceptor they had expected, they had actually received an unexceptional medium-altitude fighter, albeit with a powerful engine. At the same time, the fighter's maneuverability and responsiveness received good ratings.

In December 1941, the British Air Ministry decided to remove the Airacobra Mk.I from service. By this time, 164 of the fighters had been sent to Britain.

After Japan's attack on Pearl Harbor, the US requisitioned the fighters which had not yet been shipped to the British or were still in various stages of assembly.

In December 1941, 179 of the aircraft went into service in the USAAF with the designation P-400. They kept their British camouflage and organizational numbering. The majority of these planes served within US territory as training vehicles, but a number of P-400s took part in combat operations in New Guinea and North Africa.

A joke which may (or may not) have been used by the British in WW2: